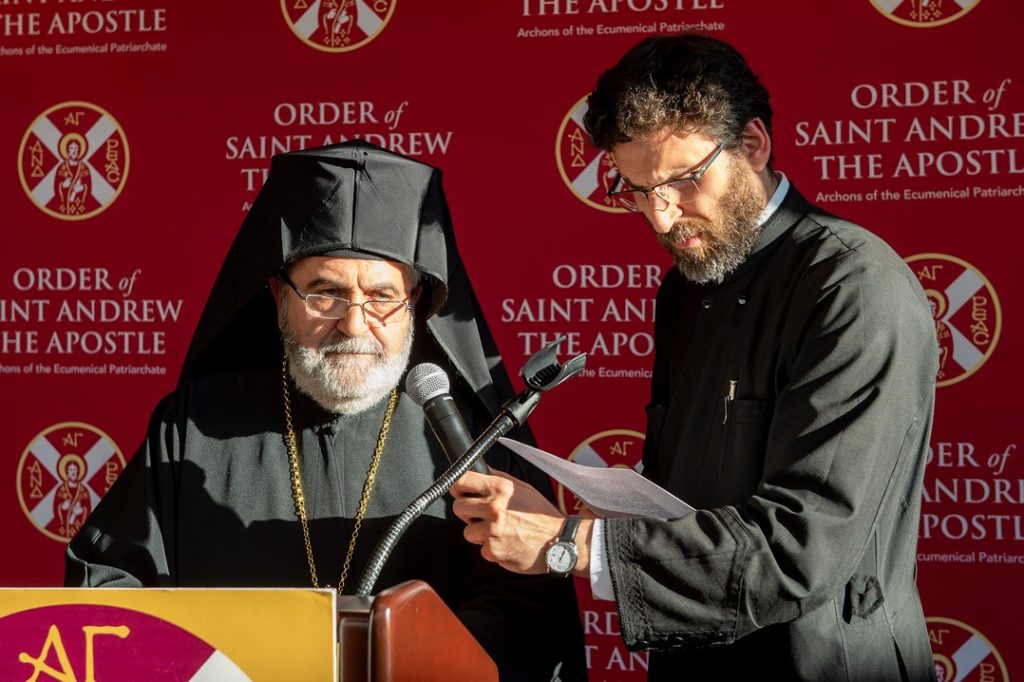 On Wednesday, July 4, 2018, His Eminence Apostolos Elder Metropolitan of Derkon addressed the Archon Family Reception which was held at the 44th Clergy-Laity Congress in Boston, MA.

Your Eminences and Graces, Reverend Fathers,

Esteemed Dr. Anthony Limberakis, Archon Aktouarios of the Great Church of Christ and National Commander of the Ecumenical Patriarchate’s Order of St. Andrew the Apostle,

It was with great joy that I accepted the kind invitation to be with you at tonight’s reception, which you have lovingly organized to honor the Patriarchal Delegation to the 44thBiennial Clergy-Laity Congress of the Holy Archdiocese of America. I personally express to you my warm gratitude, and that of His Eminence Metropolitan Maximos of Selyvria.

Following the second fall of Constantinople and the demise of the empire, the Ecumenical Patriarchate became a national, cultural and social ark of the Genos. It was not an emperor, but a Patriarch who would shoulder the cross and additional responsibility of the Ethnarchy. In this manner, the City never ceased to be the Queen of Cities, and still retains that title today in a new context—one that is more holy, and yet, more painful, and still characterized by sacrifice and the Cross that it bears. The Patriarch of Constantinople wore the imperial sakkosas a vestment, as well as the imperial crown that became a miter on his venerable head. He did not have a scepter, but rather, the imperial Patriarchal staff upon which all of the destitute Genos would come to rest. Archons were no longer in existence, but a new archonship was created around the Ethnarch-Patriarch—a new aristocracy of the Faith that humbly preserved and revealed the nobility of our Genos. Many of them would later reach high ranks in the Ottoman Empire and contribute invaluable services to the Genos and its Church, sometimes even by sacrificing their own lives.

Dearly beloved—today’s Archons of the Venerable Ecumenical Throne—you yourselves were deemed worthy to become members of this new archonship and nobility of the Genos. Your education, your piety, your love, your philanthropy, your honorable social presence and progress, and your distinguished contributions to science, good crafts and technology, as well as to great and profound works of mutual beneficence, have distinguished you from the rest of the multitude. This is what the Mother Church has been informed of, seen and honored. Consequently, our Patriarch has proudly bestowed upon you the status of archons, endowing you with a sacred ecclesiastical service and conferring upon you great and honorable titles. These designations remind us of the past glory of the Genos, and distinguish you as continuers of our tradition and history, successors of great men whose names adorned the history of Romiosini with gold letters! You are, therefore, together with the Archons of the Society of “Panagia Pammakaristos,” the honorable offikialioi. In other words, as title holders of the Genos and the Mother Church, you deserve to be addressed as “Esteemed!” And, it is, indeed, a great honor and responsibility that the Holy Apostolic and Ecumenical Throne has conferred upon you the members of its glorious eparchy, the Holy Archdiocese of America.

It is the highest honor for someone to reside under the protective shadow of the double-headed eagle of the Mother Church, as well as a unique blessing and great safety—to be organizational and administrative, ontological I would say, united with the pious fount of the Genos. The martyric Phanar, the seat of Constantinople, New Rome, always remains the saving Ark of all that is sacred and holy in Orthodoxy and Hellenism. All those who have naively and ungratefully severed themselves from it inherited the breadth of dismal temptations, ecclesiastical problems, and nationalistic issues, and continue to do so. Indeed, separation from the body of the Mother Church has proved to be a disastrous, unique act of foolishness. Disagreement and defection are not pleasing to God. Unity that is not only formal, canonical and administrative, but foremost spiritual and heartfelt, is pleasing to God. This brings His blessing and the richness of the gifts of the Holy Spirit! From its beginning, the Archdiocese of America has been recognized as a creation of the Mother Church of Constantinople—“bone of its bones and flesh of its flesh!” It is not merely one of its eparchies, but an offspring and piece of its soul, one that richly tastes the Church’s motherly love, care and compassion! When the Archbishop of America stands publically in the presence of authorities of the United States or its President, they see behind the Archbishop an ancient yet living Spiritual Institution; one that holds not only primacy of honor, but also the responsibility for 300 million faithful, who in return analogously consider, adhere to and honor this aforementioned institution! It is extremely sad that imprudent and disrespectful voices are heard that call for a distancing from the martyric Mother Church, such as that which recently transpired during the Graduation Ceremony of Hellenic College and Holy Cross Greek Orthodox School of Theology. Even more disheartening is the fact that the disrespectful and blasphemous mouth was not immediately called to good order by the powers that bear the primary ecclesiastical responsibility here. Dear esteemed President of the Archons, it is precisely at this point that you were the first to hasten with your public statement to denounce the disrespectable words uttered against the Mother Church and its martyric guardians, as well as to provide a bright spot of noble dedication to the Ecumenical Patriarchate. For this reason, you and the entire fine body of the Order of St. Andrew the Apostle have our gratitude and appreciation, as well as my personal praise and that of the Mother Church. Later on, there were other statements made by brothers in Christ, particularly His Eminence Archbishop Demetrios of America, denouncing these disrespectable words.

And so, when diligently adorning your Archonship with philanthropic initiatives and good works, I ask that you always cultivate love for others, and support our common crucified Mother Church of Constantinople in every God-pleasing and relevant manner, as well as the Holy Archdiocese of America. Conveying to you the wholehearted Patriarchal blessings of His All-Holiness, as well as his infinite love for you, I raise my glass as a toast and wish you all that is good, praiseworthy, God-pleasing and beneficial for spiritual salvation! Amen!