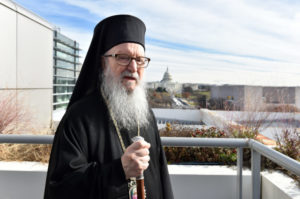 PORT WASHINGTON, NY – His Eminence Archbishop Geron of America Demetrios left everyone speechless when he arose at the end of the local Clergy Laity Congress of the Direct Archdiocesan District of New New York on March 3 and declared that he is “homeless” and “poor.” He said he doesn’t have any money, except enough for his burial. The event took place at the St. Michael parish community center in Port Washington, NY.

It is to be remembered here that Archbishop Demetrios refused to live in the home of the late Archbishop Iakovos, located in well-to-do Rye, NY, stating the commute was too lengthy to the Archdiocese in Manhattan.

The house was sold for $3 million at a time when the real estate market was at its lowest level. Of that amount, $800,000 was used to repair the roof at the Archdiocesan headquarters and, as The National Herald revealed, the rest is missing. No report has been given about the sales, nor was the money referred to in any budget.

At the March 3 local Congress, Demetrios also said that his parents left their family home to his brother and him, but he sold his portion and used the money to provide scholarships to students. He also said he doesn’t own a car, though it is common knowledge that the Archdiocese provides him with a deluxe-feature Audi, and two deacons drive him around.

He also said he never used the credit card issued to him, and recently had problems locating it during the card-cutting process the Archdiocese recently underwent. But the deacons use the card on Demetrios’ behalf, because it is unbecoming for an archbishop to use it directly.

Demetrios also said that he inherited a multimillion-dollar debt from his predecessor, Archbishop Spyridon, and that when Demetrios took over, he would pick up the phone, call a friend, and say he needed a million dollars. The friend might give $1.2 million instead, insisting that the Archdiocese keep the extra money for expenses. “I was expecting someone wealthy to give money” this time around, for the Archdiocese and the St. Nicholas National Shrine, he said, but nothing like that has happened.

He said he worked very hard and brought peace and love to the Church. He repeated again that he didn’t know anything about the financial problems of the Archdiocese, which contradicts the January 24 letter ousted Executive Director and close confidant Jerry Dimitriou wrote to him, stating Demetrios was the one making the decisions.

Archdiocesan Council Treasurer Michael Psaros spoke about the Archdiocese’s efforts to rejuvenate, and said it is now operating on solid foundations.