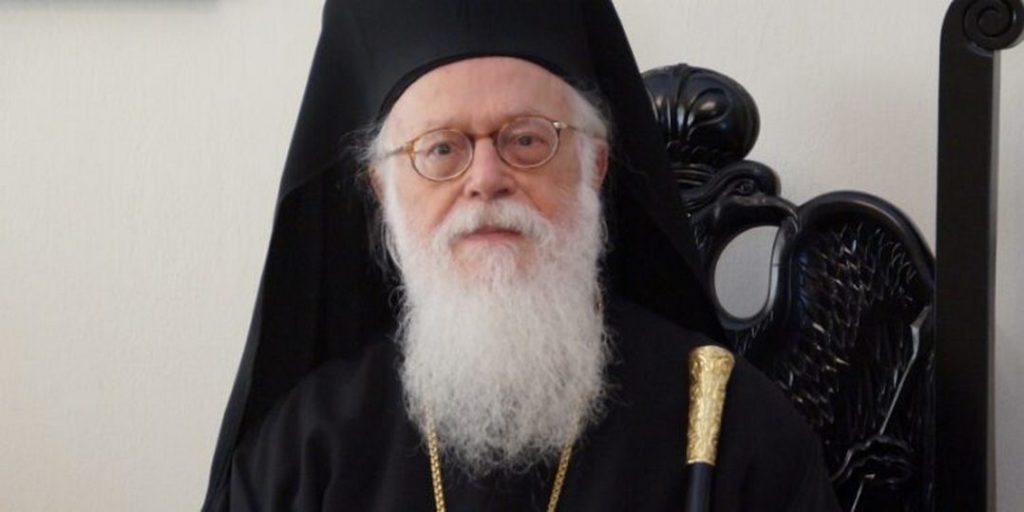 Archbishop Anastasios of Tirana and All Albania

Archbishop Anastasios of Tirana and All Albania drew a parallel of the decision of the Ecumenical Patriarchate to grant the Tomos of Autocephaly to the Church of Ukraine with the illegal intrusion of the Russian Orthodox Church in the boundaries of the Patriarchate of Alexandria.

In an article published today by the head of the Church of Albania, Archbishop Anastasios does not condemn the decision of the Moscow Patriarchate to establish an “Exarchate of Africa” with the acquisition of more than 100 clergymen of the Greek Orthodox Patriarchate, but on the contrary, “justifies” this decision as a result of the “ecclesiastical crisis in Ukraine.”

The Archbishop of Albania spoke of a “hard development” and a “divisive activity”.

In fact, he attached the text he had sent to the Orthodox Primates in November 2019, in which he stressed the need for a Synod on the Ukrainian issue, something he is still asking for.

Read the full text of Archbishop Anastasios of Tirana, Durres and all Albania

Since the beginning of the ecclesiastical crisis in Ukraine, we have pointed out with oral and written arguments that time does not heal ecclesiastical rifts and schisms.

On the contrary, it deepens and hardens them. The recent decision of the Moscow Patriarchate to establish an exarchate on the African continent confirms the initial fears. Along with the schism among millions of Ukrainian Orthodox, a new schism is being created in the sensitive African continent, where Orthodox foreign mission has been developing in recent decades.

In African countries, various Christian denominations have long been established as well as expansionist Islam. From now on, ordinary Africans will be invited to come to Orthodoxy by two Orthodox Patriarchates, without having eucharistic communion ties with each other. The scandal and the weakening of the Orthodox testimony by this divisive activity are obvious. This is a hard development.

The claim that there is no schism in Orthodoxy but simply disagreements resembles the theory that there is no coronavirus. The schism, with a variety of mutations, is evident, and it is urgent to seek treatment and the vaccine, defined by the apostolic tradition, that is, reconciliation.

In November 2019, we had sent to all the Orthodox Primates the text, which had been also published in the pres, entitled “Appeal-Prayer for overcoming the ecclesiastical polarization,” in which we stressed the absolute priority and our commitment to unity, the need to use dialogue, avoidance of ethno-racial clusters, the urgent activation of the principle of the synodicality, on which the Orthodox Church has relied for a long time. We have made it clear that “united in the Holy Spirit, with mutual respect and the sole purpose of finding a peaceful settlement, we have the possibility of reaching a solution commonly accepted by the whole Orthodox Church.”

This urgent appeal is still relevant today. For the convenience of the reader, we republish and attach the text.

Archbishop of Tirana, Durres and all Albania

Much has been written and said for several months now about the Ukrainian ecclesiastical issue. However, the duty of the unity of Orthodoxy must be emphasized. While advocating for the patriarchal spiritual experience and ecclesiastical tradition, Saint John Chrysostom declared: “The name of the Church is the name of union and agreement, not of separation. The Church was made so that we are united, not separated.” Moreover, he said: “Nothing infuriates God as much as dividing the Church.” So, we must take seriously this basic truth for every action, that is, the unity of the Church is first and foremost.

The ecclesiastical events of the past year created a new situation with the obvious involvement of geopolitical interests and expediencies. This new situation cannot be indirectly or immediately ignored. Granting Autocephaly to the Church of Ukraine did not bring the desired unity of the Orthodox nor peace, as had been the case with all previous instances of granting Autocephaly. The central figure of the Ukrainian problem, the self-proclaimed “Patriarch” Filaret, finally, rejected the Tomos, blaming its content and purpose. The divisions have spread to other areas and to the Orthodox world, in general. At the same time, the pre-eminent mystery of unity and apology, the Eucharis, was used by the Moscow Patriarchate during the controversy as a lever of pressure. Tens of millions of Orthodox have severed Eucharistic communion ties with the Ecumenical Patriarchate, the Patriarchate of Alexandria, and the Church of Greece. After all, the issue of the validity of the ordinations, which were performed by the self-proclaimed “Patriarch” Filaret, even though he was excommunicated, still spreads division. The painful consequences of the attempt are well known not only in Orthodox circles but in the whole of Christendom.

At present, there is a disturbing silence in most Orthodox Churches. The emerging political pressures on both sides are damaging the spiritual prestige of the Orthodox Church. The mobilization of irresponsible persons who insult those who express different opinions, and at the same time flatter those who support them degrades the Orthodox dialogue at a critical time for Orthodoxy. Some ecclesiastical circles express the expectation that all the Orthodox Churches will recognize gradually the Tomos of Autocephaly. However, even if some Autocephalous Churches recognize it, several others, as they have publicly stated so far, will remain in denial. This will result in an ethno-racial division (into Greeks, Slavs and those who want harmonious relations with all), which nullifies the multinational and multicultural nature of Orthodoxy and its ecumenicality. Time does not correct automatically the ecclesiastical schisms nor does it heal them; on the contrary, it consolidates and deepens them.

It is now urgent to look for ways to overcome ecclesiastical polarization. To tackle the various conflicts in the world, the first step is de-escalation. It is widely accepted and often reiterated internationally that tensions can only be addressed through serious dialogue. Let us seek as soon as possible communication and exchange of creative proposals between the key actors of the crisis. There are people in the Orthodox Church who can contribute to the immediate start of consultations.

It is time to lay the foundations of the new efforts of truths of the Orthodox Tradition, which are based on the Bible. For example, “Why do you call me, ‘Lord, Lord,’ and do not do what I say?” (Luke 6:46, cf. Matthew7:21); “But I tell you, love your enemies and pray for those who persecute you…” (Matthew 5:44); “And forgive us our debts, as we also have forgiven our debtors…”(Matthew 6:12); “…Make every effort to keep the unity of the Spirit through the bond of peace” (To Ephesians4:3, see also To Galatians5:15). By faithfully following the Lord’s commands, we will see new ways of overcoming this crisis.

There are solutions. God will enlighten us to find them. However, there will be no solutions through the exchange of offensive and threatening texts or through extra-ecclesiastical interventions; nor can they be imposed unilaterally or automatically over time. Any delay worsens the present painful situation. And if a solution is found “in the end,” “in the future,” there will be many unpleasant chapters in the history of Orthodoxy. The basic principle of synodicality, on which the Orthodox Church has been based over time, is the only one that can finally open the way to the existing crisis. United in the Holy Spirit, with mutual respect and the sole purpose of finding a peaceful settlement, we have the possibility of reaching a solution commonly accepted by the whole Orthodox Church. As long as the use of the synodicality is postponed to a Pan-Orthodox level, the multilateral divisions in the Orthodox Ecumene will become even more dangerous. Today’s technology exacerbates the disturbance, confusion and unrest among Orthodox, and ultimately reduces the credibility of Orthodoxy in the modern world.

In the view of Christmas celebrations, the great feast of the nativity of the Son and Word of God, of the initiative of the Father for reconciliation with humankind, we humbly intensify our prayer to hasten the steps for reconciliation. So, all the Orthodox have the right to chant together “Glory to God in the highest heaven, and on earth peace to those on whom his favor rests” (Luke 2:14). “All this is from God, who reconciled us to himself through Christ and gave us the ministry of reconciliation” (II To Corinthians 5:18).

The initiative for the treatment of the new situation undoubtedly belongs to the Ecumenical Patriarchate. However, all the Autocephalous Churches, all Orthodox without exception, have a responsibility to contribute to reconciliation.

The reconciliation will bring peace to millions of faithful people. At the same time, Orthodoxy will confirm its spiritual ability to heal wounds, guided by the Word of God and the energy of the Holy Spirit. Confirming the truth that it is the One, Holy, Catholic and Apostolic Church, which has at its head Christ, the incarnate Son of God, “for whom and through whom everything exists” (Hebrews 2:10), “…gave us the ministry of reconciliation” (II To Corinthians 5:18).