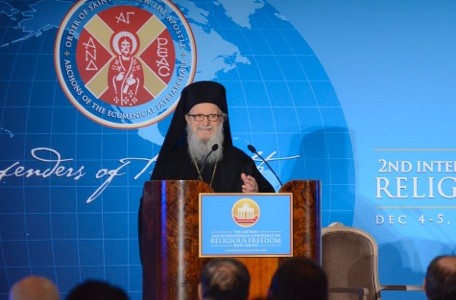 BERLIN –  The Order of St. Andrew the Apostle, Archons of the Ecumenical Patriarchate hosted the 2nd Archon International Conference on Religious Freedom December 4-5, 2013 in Berlin, Germany.

The conference was held at the historic Adlon Hotel and was presented in cooperation with the Patriarchal Liaison Office to the European Union and the Greek Orthodox Metropolis of Germany.

Apropos of the conference taking place in the shadow of the Brandenburg Gate, the theme was, ”Tearing Down Walls: Achieving Religious Equality in Turkey.”

His All Holiness Ecumenical Patriarch Bartholomew and Hillary Clinton addressed the participants by video.

His All Holiness stated said to the Conference participants:

“Ultimately, our struggle for religious freedom and our respect for the conscience of every human being are proof of the triumph of love over hatred, of unity over division, and of compassion over the numbing sensation of indifference that is rooted in contemporary materialism. True freedom of conscience is based on the conviction that our relationship with “the other” is not separate from but integrally related to our relationship with ourselves. After all, again in the words of St. Paul, “we are all members of one body.” (Romans 12.5)