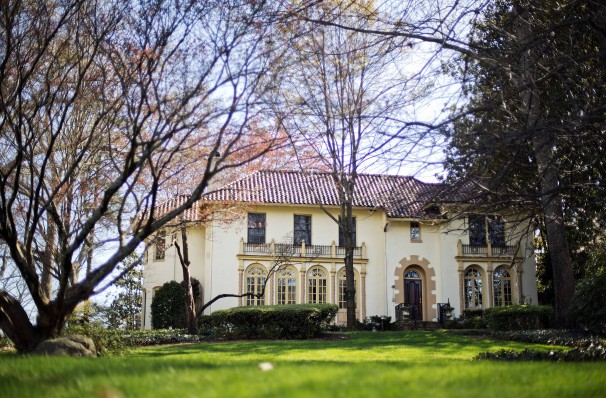 (David Goldman/ Associated Press ) – In this March 31, 2014 photo, the former residence of Atlanta Archbishop Wilton Gregory sits under construction to be used as a rectory for six priests after Gregory moved to a nearby $2.2 million mansion for his own use in Atlanta. Gregory apologized for his spending and offered to put the home up for sale after Pope Francis permanently removed a German bishop for his lavish spending on a renovation project.

Where do some of our Orthodox Christian bishops live?  What are their living expenses?  How many have homes abroad? Who owns their homes?

Days after Pope Francis permanently removed a German bishop for his lavish spending on a new residence, the Atlanta archbishop apologized for building a $2.2 million mansion as his residence. He bowed to criticism from local parishioners and said he’d consider selling the new home in Buckhead, Atlanta’s toniest neighborhood.

In letters, emails and a meeting, local Catholics told Gregory the price tag was outlandish, especially in light of Francis’ frugality. The Tudor-style mansion, stretching nearly 6,400 square feet, includes two dining rooms and a safe room. The archbishop said the new pope has “set the bar” for church leaders and others, and Gregory said he hadn’t looked at the project’s cost in terms of his own “integrity and pastoral credibility.”

“I failed to consider the impact on the families throughout the archdiocese who, though struggling to pay their mortgages, utilities, tuition and other bills, faithfully respond year after year to my pleas to assist with funding our ministries and services,” Gregory wrote late Monday on the website of the archdiocesan newspaper.

It’s a challenge bishops will be facing more pointedly — and publicly — in the age of Francis.

In the Archdiocese of Newark, N.J., parishioners have recently criticized Archbishop John Myers, and withheld some donations, after they learned the archdiocese was spending at least $500,000 to expand his retirement home, adding an indoor therapy pool, fireplaces and an office library. Last week, Francis removed German bishop Franz-Peter Tebartz-van Elst after he spent $43 million on a new residence and related renovations.

“More people are thinking about it, how to tone it down as far as their living arrangements,” said Russell Shaw, a former spokesman for the U.S. Conference of Catholic Bishops and a Catholic writer.

Pope Francis has made clear he expects his priests and bishops to follow his example of sobriety, imploring them to refrain from driving fancy cars or using the latest iPhone. To emphasize the point, Francis convened the heads of all Vatican offices Tuesday to discuss implementing his apostolic exhortation “The Joy of the Gospel.”

In the statement, a blueprint for his papacy, Francis denounces the “idolatry of money,” self-indulgence and “insidious worldliness” within the church, and laments how the poor have been excluded from the global economy. Francis has implemented a spending review within the Vatican, enacting a hiring freeze and overtime cut in a bid to reduce waste.

Gregory’s new residence was made possible by a $15 million gift from the nephew of Margaret Mitchell, the author of the Civil War epic “Gone With The Wind.” When Joseph Mitchell died in 2011, he left much of his estate to the archdiocese, asking that the proceeds be used for “general religious and charitable purposes.” Mitchell sought primary consideration for his home parish, Christ the King Cathedral.

The archdiocese set aside $7.5 million for the cathedral’s building fund. Another $3.75 million went to Catholic Charities and other service groups, and several million more went to disadvantaged parishes, parish endowments, a retirement fund for priests and a Jesuit high school.

But Gregory needed a new home after giving up his residence near the cathedral, where more space was needed for a growing congregation.

The cathedral used money from Mitchell to buy Gregory’s old home for $1.9 million, according to tax records. The church will spend another $292,000 to expand the home so its priests can live there. The archbishop then decided to build the new residence on land Mitchell had donated. The one-story home already standing on the property, where Mitchell lived, was demolished to make way for the mansion. Gregory moved in three months ago.

Gregory initially defended the decision as an accommodation he had made for the sake of the cathedral. But parishioners raised questions, and some met with him to directly voice their concern about the expenditure. In one meeting, they cited the pope.

“Pope Francis is setting the example for all clergy worldwide,” said Laura Mullins, a local parishioner who arranged the meeting with Gregory. “And if Pope Francis saw his 6,000-foot Tudor mansion and the finest amenities and details, I feel certain he would tell him to sell the home and to use the money more wisely.”

The scrutiny comes at an especially sensitive time for Gregory, as speculation swirls about whether he could be a potential successor to Chicago Cardinal Francis George, 77, who is expected to retire soon. Gregory, a former auxiliary bishop in Chicago, was president of the U.S. Conference of Catholic Bishops at the height of the clergy sex abuse crisis, and is credited with persuading church leaders to adopt toughened penalties for abusers.

The archbishop’s new residence was originally designed with finer perks, according to blueprints filed with the city. Architectural plans called for an antique chandelier in the foyer, space for a wine room in the lower level and an upper-level safe room, sometimes referred to as a panic room, protected by steel doors and with nearby access to pull-down stairs for a quick escape. Gregory spokeswoman Patricia Chivers said the chandelier and wine room were rejected.

The home retained the following trappings:

— A second-story safe room. Design documents showed it was to be protected by two steel doors and furnished with a cot, though some building plans changed during the project. It was unclear why such protection was needed; Architects planned a separate storm room in the lower level.

— An eight-burner kitchen stove. Gregory’s spokeswoman said that stove is for catering meals.

— An elevator and public and private offices;

— Two dining rooms, including a grand dining room that design plans had exiting out through French-style doors into a courtyard;

— A walk-in closet for liturgical vestments.

Even before Francis was elected in 2013, American bishops had already been selling mansions built by their predecessors in the late 19th and early 20th centuries as symbols of the growing power of the Catholic Church. The downsizing, in the Archdioceses of Boston and Philadelphia among others, was considered financially and symbolically important at a time when dioceses were closing aging churches and schools they could no longer afford to maintain, and paying large settlements over clergy sex abuse.

In his apology, Gregory said that if the financial and other internal Church councils advise him to sell the new home, he will begin the process of doing so and move somewhere else.