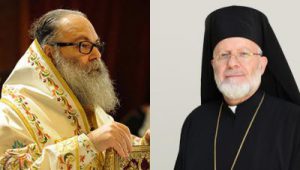 Englewood NJ – His Eminence Metropolitan Joseph, Archbishop of New York and Metropolitan of All North America, is pleased to announce the visit of His Beatitude John X, Patriarch of Antioch and All the East, to the United States on October 21–31, 2017. (Read more about His Beatitude’s historic visit to New York on October 29, 2017.)

The purpose of the visit is to meet with the leadership of the United Nations as well as members of the current administration of the United States to: 1) promote a peaceful solution to the Syrian crisis, 2) highlight the current humanitarian crisis, and 3) discuss the future of Christians in Syria and the Middle East. His Beatitude will also be an honored guest at the “In Defense of Christians” Summit in Washington, D.C., from October 24–26. The Summit is titled “American Leadership and Securing the Future of Christians in the Middle East.”

His Beatitude has grown increasingly concerned over the last six years as the situation in Syria has worsened. One of the key goals of his visit is to ensure that American and international decisionmakers understand that the Antiochian Patriarchate represents a strong network of Christian churches in Syria and the Middle East, and that this is a constituency which is committed to peace. As an historic and highly regarded institution in the Middle East, the Antiochian Orthodox Christian Church can contribute to a peaceful resolution to the current conflict.

Another one of His Beatitude’s goals will be to highlight the very effective humanitarian arm of the Patriarchate, the Department of Ecumenical Relationships and Development (DERD). DERD is the largest independent local NGO operating inside Syria and like the Patriarchate, is completely independent of government involvement. DERD seeks to “offer help to those who are in dire need, ensuring that efforts are made to provide service to all, to spread the spirit of humanity, justice, tranquility and peace among those affected, regardless of race, religion or ethnicity.”

While there has been tremendous media interest in the Syrian Refugees (which number approximately 2.5 million), the situation is even more dire within Syria. The UN estimates that there are currently 6.5 million Internally Displaced Persons (IDPs) inside of Syria, with more than half of those being children. It is this population which DERD seeks to reach. DERD now ministers to approximately 3 million Syrians annually, and seeks to go and have mercy, as did the Good Samaritan. In that spirit, almost 90% of those it serves are of the Muslim faith. (View the video clip about DERD, and contribute directly online.)

Information on scheduling and liturgical services at which His Beatitude will be presiding will be available shortly. For questions regarding the visit of His Beatitude Patriarch John X or for press inquiries, contact Sonia Tower at: [email protected] or (212) 308-3696.