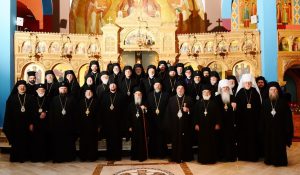 Assembly of Canonical Orthodox Bishops of the USA – 2017

The Assembly of Canonical Orthodox Bishops of the United States of America held its Eighth Annual General Assembly Meeting October 3-5, 2017 in Garfield, NJ. Thirty-Two Hierarchs from across the country gathered to prayerfully consider ways to enhance their Orthodox witness to the world and to address their common concerns for youth and emerging adults.

In his opening remarks, the Assembly Chairman, His Eminence Archbishop Demetrios, reminded the Hierarchs that “through God’s grace and providence, we have all been brought together to this one place and we have been called to walk in unison toward a common goal…. While our sights are ultimately set on the ‘things to come and longed for,’ as long as we call ourselves co-laborers in God’s vineyard, it is our sacred obligation to work together to realize this goal by drawing ever-closer to one another.”

The assembled Hierarchs heard a report by Dr. Richard Flory, Senior Director of Research and Evaluation at the Center for Religion and Civic Culture at the University of Southern California. Among other things, Dr. Flory explained the extensive research regarding the decline in religious affiliation of young adults over the last fifteen years. He emphasized that in most cases young adults have become increasingly indifferent to religion. Dr. Ann Bezzerides, Director of the Office of Vocation Ministry at Hellenic College Holy | Cross Greek Orthodox School of Theology, emphasized the critical need to focus on all aspects of religious education and engagement for our youth and young adults.

The Hierarchs also heard reports from the Executive Director of International Orthodox Christian Charities (IOCC) and from the Chairman of the Board of OCF; both organizations are official Agencies of the Assembly.

His Eminence Metropolitan Nicolae, Chair of the Committee for Canonical Regional Planning, presented the findings of a recent study: “Places of Greater Orthodox Unity in America: Local Inter-Parish Cooperation,” which identified twenty-one regions with well-organized and active Orthodox Clergy Associations, each with significant cooperation and communication among the parish communities. The Assembly of Bishops agreed to fully support and strengthen the work of local Clergy Associations in these regions and also endorsed the second phase of the study that will analyze and catalogue the effectiveness of the various expressions of inter-parish cooperation.

The Assembly of Bishops concluded its work by issuing a Message to the faithful of the United States of America.