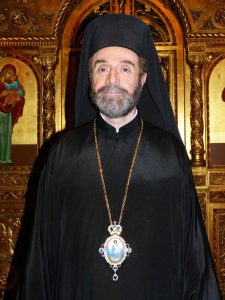 NEW YORK – His Grace Bishop Sevastianos of Zela was elected Metropolitan of Chicago during the process of the selection of the three person ballot (triprospon) by the Holy Eparchial Synod of the Greek Orthodox Archdiocese of America, presided by His Eminence Archbishop Demetrios, Geron of America.

Bishop Sevastianos was until now the Chief Secretary of the Holy Eparchial Synod and the Spiritual Advisor to the National Philoptochos Society. He was ordained a Bishop and given the honorary title of the city of Zela on December 17, 2011.

Bishop Sevastianos was born in Ano-Zodia, Cyprus. He is the first born of three children of Panayiota and Frixos Skordallos. He is a graduate of the Theological School of the University of Athens, Greece (1978). He received a scholarship through the World Council of Churches to study in the United States at Columbia Theological Seminary, Decatur Georgia (1982) where he received a Th.M. in Pastoral Psychology. He has worked and received advanced certification in Clinical Pastoral Education at Caraway Methodist Medical Center, Birmingham, Alabama (1980-1982), and furthered his studies in Pastoral Psychology at Vanderbilt University, Nashville Tennessee and Middle Tennessee State University (1982-1984).