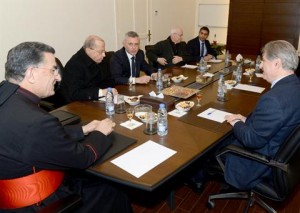 “It was agreed and stressed that it is necessary to adopt an electoral law that provides the best and fairest representation for all Lebanese sects,” said a brief statement issued after the meeting.

Lebanese Forces sources told The Daily Star that the party’s leader Samir Geagea was not present at the meeting for “mere security reasons,” as the time and place of the meeting were leaked to media ahead of time.

The statement said the patriarch and the leaders, including Geagea, would continue talks over the matter.

The meeting comes days after representatives of the LF, Kataeb, Marada and FPM met at Bkirki and agreed to support the electoral draft law proposed by the Orthodox Gathering. It would enable every sect to elect its own MPs under a proportional representation system with the entirety of Lebanon as a single district. The draft law is opposed by the Future Movement and the Progressive Socialist Party.

But in remarks published by a local newspaper Friday, Rai indicated that Bkirki was not fully behind the Orthodox Gathering proposal. “Bkirki does not support an Orthodox or Maronite [electoral]proposal; it supports only a Lebanese proposal,” Rai said.

Meanwhile, after four days of futile deliberations, a parliamentary subcommittee discussing electoral draft laws approved the minutes of its meetings and is set to resume talks Monday.

During a morning session, the subcommittee discussed draft laws that would modify the number of MPs, the final item on its agenda.

“The subcommittee finalized the discussion of the draft laws it received from joint parliamentary committees, including the number of MPs,” Western Bekaa MP Robert Ghanem said.

“The minutes will be officially read in the session that will be held Monday afternoon … we will then try to look for common points and agree on one electoral law,” added Ghanem, who is chairing the subcommittee’s meetings. The subcommittee discussed three draft electoral laws, including the Cabinet’s proposal, which would divide the country into 13 medium-sized districts under a proportional representation system. Also considered were a draft law presented by Aoun’s bloc, similar to the Orthodox proposal, and a third one presented by Christian parties from the March 14 coalition, which would divide Lebanon into 50 small districts under a winner-takes-all system.

For the second session in a row, Baabda MP Alain Aoun from the FPM did not attend. Aoun suspended his participation in the subcommittee’s meetings Thursday after March 14 subcommittee members rejected his demand that the minutes of the meetings be approved straightaway, and that the subcommittee recommend that Parliament vote on the Orthodox proposal, which was supported by the majority of blocs during the meetings.

March 14 lawmakers argued that minutes would be approved once the number of MPs, which is the final item on the agenda, is discussed.

Speaking to a local radio station, Aoun said he wanted to review the proceedings of Friday’s meeting in order to decide whether to participate in Monday’s session, adding that his decision to boycott the meetings was backed by his bloc.

But Future Movement MP Serge Torsarkissian, also a member of the subcommittee, lashed out at Aoun’s boycott, calling it an election-related charade to show that the FPM was the most supportive of Christians’ rights.

“It is clear that the absence of my colleague Alain Aoun was coordinated with other March 8 groups,” he said. “Unfortunately, this wasted time … confused Christians … and was a bit of folklore ahead of elections to try to prove to Christians that the Free Patriotic Movement and its allies are the only groups concerned about the rights of Christians.”

“No draft law can be passed without the consensus of all groups … we are all eager to preserve the rights of Christians,” Torsarkissian added.

For his part, Metn MP Sami Gemayel hoped that Berri would call for a parliamentary session soon to put the three draft laws to a vote. “Today, we finished our work as a subcommittee, and Speaker Nabih Berri should set a date for a general assembly session [to pass a draft electoral law],” Gemayel said.

Gemayel called for the electoral law to be developed transparently, not in secret dealings, which he said has been the case over the past 23 years.

“There is one thing we are not ready to let drop: our demand for proper representation … we are no longer willing to go to elections with this [1960] law,” he said. “Let our allies and rivals put forward proposals that provide … fair representation, or else we stick to the Orthodox proposal.”

The winner-takes-all 1960 law, a version of which was used in the 2009 elections, is opposed by March 8 and March 14 groups alike.

The subcommittee, which is tackling the most controversial elements of a new electoral law, also discussed whether to increase the number of MPs.

According to a lawmaker who attended the meeting, March 14 MPs of the subcommittee along with Metn MP Hagop Pakradounian from Aoun’s bloc and PSP MP Akram Shehayeb supported increasing the number of lawmakers by six: one Sunni, one Shiite, one Druze, two Syriacs and Catholic.

Gemayel has proposed a draft law to increase the number of MPs by two, one Druze and one representing the Syriac sects, which currently do not have their own MP, but are part of the Christian “Minorities” seat.

Future Movement MP Nabil de Freij’s draft law would increase the number of MPs by four: one Syriac Catholic, one Syriac Orthodox, one Sunni and one Shiite.

Under the government’s draft electoral law, six MPs representing expatriates would be added to the current 128. Lebanese Forces MP George Adwan proposed that the number of MPs be reduced to 108, as agreed upon in the 1989 Taif Accord.

Hezbollah MP Ali Fayyad said after the session that his party supported the Cabinet’s draft law.

Shortly after the session began, Adwan left the meeting and paid a visit to Berri, while the rest of the subcommittee members wandered in the corridors, saying they were taking a break for “Friday prayers.” Fatfat said jokingly that Adwan went to perform Friday prayers.

Speaking to reporters after meeting Berri at his Ain al-Tineh residence, Adwan praised the speaker for supporting any draft electoral law Christian parties agree on.

“We praised Speaker Berri’s stance to support the Orthodox proposal which comes in line with his stance to support any draft electoral law that Christians agree on,” he said. “The speaker supports this draft law because he supports lifting injustice inflicted on Christians [as a result of the 1960 law],” Adwan added.