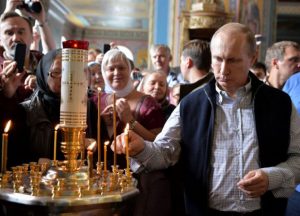 (Photo: Sputnik/Kremlin/Alexei Druzhinin/via Reuters)
Russian President Vladimir Putin attends a religious service at the Cathedral of the Transfiguration of the Savior at Valaam Monastery, Russia, July 11, 2016.

Russia’s so-called “anti-extremism” law that restricts evangelism and missionary activities went into effect on Wednesday, and religious freedom advocacy groups say they are starting to assess the impact it will have on Christians in the country.

“For Christian advocates inside the country, there are challenges and risks,” the American Center for Law and Justice’s Gene Kapp said in a statement to The Christian Post on Thursday.

“Our team at the Slavic Centre for Law and Justice [ACLJ’s Moscow affiliate that has argued against the law] is in the process of evaluating and analyzing the impact of the new directives. They are also preparing a webinar to provide critical advice and analysis for the Christian community on this vital issue. Details and timing are still being worked out. We will stand with them and assist in any way possible.”

The contested law was reportedly crafted in an effort to combat the Islamic State, according to The Economist, following the terror group’s claim that it was responsible for the downing of Russian Metrojet flight 9268, which crashed in Egypt’s Sinai Peninsula last fall and killed all 224 passengers on board.

Many religious liberty advocates, however, believe the law does little to thwart radical Islamic jihadists and instead targets minority Christian denominations unaffiliated with the Moscow Patriarchate of the Russian Orthodox Church.

Faith McDonnell, director of religious liberty programs at the Institute on Religion and Democracy in Washington, D.C., said in an interview with The DailySignal on Wednesday, “The law doesn’t do that much to defend from terrorism and only prevents Christians and others who are not Orthodox from preaching and proselytizing,”

“Russia is slipping back to what it was before,” McDonnell added.

In an email to The Daily Signal, Archbishop Andrew Maklakov, administrator of the Russian Orthodox Autonomous Church of America, said: “As the Russian Federation has drifted back to its Soviet roots more and more over the past 25 years, it has increasingly sought to harass, persecute, and destroy any religious organization that it might consider competition to its own ‘state church.'”

As CP reported last week, under the new law foreign missionaries will not be allowed to speak at churches unless they have a work permit from Russian authorities. Similarly, any kind of discussion about God with non-believers is now considered a missionary activity and punishable by law. And religious activities, even in private homes, is no longer allowed.

In an eerie echo of its Soviet-era KGB past, the law also states that “every citizen is required to report religious activity to the authorities, or face punishment him or herself.”

Named after the bill’s author, Irina Yarovaya, the “Yarovaya law” contains police and counterterrorism measures that grant state security agencies the authority to access private communications, regulate Christian proselytizing on the internet, and requires telecom companies to store phone conversations, text messages, and videos for six months and provide that data to the government.

The Electronic Frontier Foundation, a nonprofit group that aims to defend civil liberties in the digital world, noted Tuesday that Mikhail Fedotov, Putin’s human rights head, urged senators of Russia’s Federal Council not to support the bill when it was being considered.