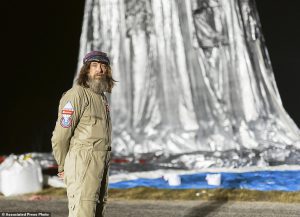 In this Monday, July 11, 2016 photo released Wednesday, July 20, 2016 by Morton, Russian adventurer Fedor Konyukhov stands by his helium and hot-air balloon being inflated before liftoff on his record attempt to fly solo in a balloon around the world nonstop in Northam in Western Australia state. Konyukhov, 65, now flying at more than 6,000 meters (20 feet) above the ground, was battling sleep deprivation, freezing temperatures and ice in his oxygen mask as he nears the end of his record attempt to fly solo around the world nonstop, his son said on Wednesday, July 20, 2016. (Oscar Konyukhov/Morton via AP)

By ASSOCIATED PRESS and ASHLEIGH DAVIS FOR DAILY MAIL AUSTRALIA

A Russian Orthodox priest has entered the record books after enduring 11 days of freezing temperatures and ferocious storms to become the fastest person to fly solo around the world in a hot air balloon.

However, Fedor Konyukhov was less interested in his historic achievement and more excited by the prospect of his first shower in almost two weeks after he touched down in the Australian outback on Saturday.

His 56-metre (184-foot) tall helium and hot air balloon had begun its journey 11 days and six hours earlier, starting out in Perth, before heading across Australia, over the South Pacific to Chile, Argentina and Uruguay before reaching Brazil on day seven. 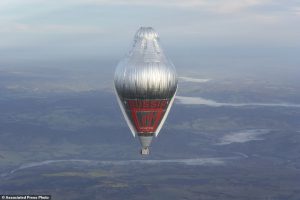 Mr Konyukhov is pictured floating at more than 6,000 metres (20,000 feet) close to Northam, Western Australia in his helium and hot-air balloon as he makes a record attempt to fly solo in a balloon around the world nonstop

It would be the last time the intrepid explorer would see dry land again until he arrived on the Western coast of Australia today.

His journey of more than 21,100 miles also took him through a thunder storm in the Antarctic Circle, where temperatures outside the gondola – which measured just two metres high, two metres (6ft, 7ins) long and 1.8 metres (5 feet, 11 inches) wide – fell to minus 50 degrees Celsius.

The gondola heating stopped working on Thursday, so Mr Konyukhov had to thaw his drinking water with the balloon’s main hot air burner.

The journey also took him to speeds up to 240 kilometres (150 miles) per hour and heights up to 10,614 metres (34,823 feet) before he released helium to prevent the balloon from continually climbing as its fuel load lightened, his son Oscar Konyukhov said.

Mr Konyukhov aimed to get four hours of sleep a day in naps of 30 or 40 minutes between hours of checking and maintaining equipment and instruments.

Crews in six helicopters were following the 1.6-metric tonne (1.8 tonne) balloon inland to help Mr Konyukhov land somewhere along a 500 kilometre (300-mile) stretch of outback between Northam and the gold mining town of Kalgoorlie.

‘We’ve got to keep him up a bit longer because there’s quite a bit of wind on the ground here,’ support team member Steve Griffin said ahead of the landing.

‘We want to get him a bit further inland where there’s a bit more open space and some big paddocks and hopefully get him clear of power lines which are a big concern.

‘The balloon is coated with an aluminum foil so we don’t want it touching power lines or the whole thing will become live.’

In the end though, Mr Konyukhov walked away unharmed – apart from a slight bruise on his cheek.

He had expected to be dragged along the ground for several kilometres before coming to a halt.

Mr Konyukhov’s gondola bounced twice over 200 metres in an empty field and tipped on its side before the support crew grabbed it to prevent the deflating balloon from dragging it further, crew member Steve Griffin said.

‘He’s got a bruise on his cheek, but he’s pretty well unscathed,’ said Mr Griffin.

Mr Konyukhov flew by helicopter back to Northam, where his first shower in 11 days was a priority, Mr Griffin added.

Mr Konyukhov’s speedy journey smashed the previous record, which had been held for 14 years.

In 2002 American businessman Steve Fossett also started from Northam to set a record of 13 days and eight hours for his 33,000-kilometre (21,000-mile) journey.

Fossett was forced by strong winds to spend more than a day in the air after setting his own record as the first person to circle the globe in a balloon.

His capsuled tumbled along the ground for 15 minutes after he landed on a cattle station in southwest Queensland state.

The then 58-year-old emerged from the capsule with a bloodied mouth from biting his lip during the rough landing, but was otherwise unhurt.

The Swiss-based World Air Sports Federation did not immediately respond to a request for confirmation of the new record.