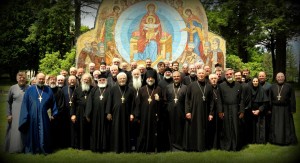 SOUTH CANAAN, PA [STOTS Media] – Tuesday, June 17 through Thursday, June 19, 2014 St. Tikhon’s Seminary hosted their 2nd Annual Clergy Continuing Education Symposium. Over 60 participants traveled, from several OCA dioceses,  to attend the lectures. Among the participants were clergy and monastics, men, women, seminarians and lay persons. Those attending received up to 18 of the 20 hours now required by the Department of Continuing Education.

On Tuesday, June 17 the Symposium opened with a Molieben in the Seminary Chapel. The group then proceeded to room 233 for a lecture by Dr. Christopher Veniamin, D. Phil. (Oxon.), Professor of Patristics at St. Tikhon’s Seminary entitled “Spiritual Life in Saint Silouan the Athonite.” The second lecture presented was “The Greeting of Mary and Elizabeth: The Sanctity of Life,” by Archpriest John Kowalczyk, Senior Lecturer in Pastoral Practice, Director of Field Education at St. Tikhon’s Seminary.

On Wednesday, following Divine Liturgy and breakfast, Archimandrite Sergius, Abbot of St. Tikhon’s Monastery and Lecturer in Spirituality at the Seminary, presented his talk on “Prayer as Communion – Personal and Liturgical Prayer.” During the afternoon session Mary Ford, Ph.D., Associate Professor of New Testament at St. Tikhon’s Seminary presented “Orthodox Insights into the Book of Revelation.” In the evening a banquet was held at the seminary dining hall. A toast was offered by the Rector of the seminary, His Grace Bishop Michael, in which he encouraged the visiting clergy to set aside time during the symposium to not only edify themselves by participating in each of the lectures, but to also take a moment to renew and deepen their relationships with one another. “The priesthood is a difficult and unique calling in the life of the Church. It can seem like a very solitary responsibility at times. I encourage you to look around you. No one understands this reality better than your brothers sitting next to you.”

On Thursday David Ford, Ph.D., Professor of Church History at St. Tikhon’s Seminary, began the last day of the Symposium with his lecture, “Encouraging People to Seek Help from the Saints in Times of Suffering.” Finally, the Symposium was brought to a close with the talk “Clergy Health – Achieving the Proper Balance,” by Archpriest Steven Voytovich, D.Min., Dean and Associate Professor of Pastoral Arts and Practice at St. Tikhon’s Seminary. This course echoed the words of His Grace that were offered the previous evening and explored pastoral compassion and love as both renewable and precious resources that need to be carefully tended in our own life and within our family, in order that those resources may be available to the persons to whom we are called to minister.

In addition to the time spent in presentation sessions, the opportunity for worship and fellowship were important parts of the Symposium. On Wednesday and Thursday, Hierarchical Divine Liturgies were celebrated and each evening there was a break for Vespers at the Monastery Church. Many of those attending the program served and sang during liturgical services. As with all events that occur within the St. Tikhon’s Community, each session as well as every meal began and ended in prayer. Wednesday evening there was also time set aside for fellowship during and after the dinner meal, with many of the attendees staying and talking long into the night following the banquet.

St. Tikhon’s Seminary would like to thank all of the men and women who worked so hard to put this event together: the administration faculty, staff, and student volunteers who all worked tirelessly to ensure that this event was a worthwhile and edifying opportunity for pastoral and personal growth for all of the attendees. A very special thank you is to be offered to Matushka Larissa Gregory, who together with her husband Deacon Theodore and her son Nicholas prepared, cooked, served, and cleaned up each meal. Thank you as well to everyone who attended the 2nd Annual Continuing Education Clergy Symposium, don’t forget to mark your calendars for next year!