[ditty_news_ticker id="27897"] Communique: Any clarification regarding faith must be made in ecclesial communion, not in disunion - Orthodox Christian Laity 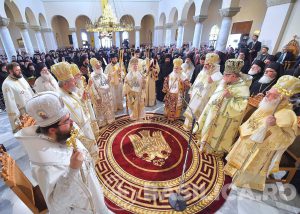 During the working session of the Holy Synod of the Romanian Orthodox Church, gathered on Friday, 16 December 2016, under the chairmanship of His Beatitude Patriarch Daniel, in the Synodal Hall of the Patriarchal Residence, the Holy Synod noted with sorrow the recent evolution of negative reactions regarding the reception in Romania of the Holy and Great Council of the Orthodox Church (Crete, 2016).

The Romanian Patriarchate has stressed several times the fact that “the Council in Crete did not formulate new dogmas, but rather professed that the Orthodox Church is the One, Holy, Catholic and Apostolic Church of Christ”, and has constantly urged that peace and unity of the Church be retained with all responsibility, recalling the words of Saint John Chrysostom saying that “nothing provokes God’s anger more than the division of the Church! Even if we would have achieved ten thousand glorious acts, yet we who cut to pieces the fullness of the Church suffer punishment no less sore than they who mangled His body” (St John Chrysostom, Homily 11 on Ephesians, PG 62, 85).

However, we note with sorrow in our soul that, in a fanatical and harmful manner, some rebellious people misled certain clerics and faithful stating falsely and denigratingly that the Council in Crete has proclaimed ecumenism as dogma of faith, and some clergy, believing this falsehood, uncanonically interrupted the liturgical remembrance of their bishop, thus disturbing the peace and unity of the Church by their divisive attitude.

The Holy Synod of the Romanian Orthodox Church stressed that nor the Council in Crete neither some other Orthodox Synod has declared ecumenism as a dogma of faith, in the same way as no canonical Orthodox Synod has ever declared ecumenism as being “pan-heresy”. Therefore, the accusations brought by opponents of the Council in Crete are unjust, irresponsible, and harmful for the unity of the Church.

From an Orthodox point of view, lucid ecumenism does not represent a dogma of faith, but a spiritual attitude of dialogue and cooperation between Christians, instead of controversy full of confessional hate and of violent confrontation, which has been manifested for several centuries during the history of Christianity. The ecumenical movement came into being at the beginning of the 20th century, when western Christian missionaries preached the Gospel of love to non-Christian peoples of Africa and Asia, while Christians were divided themselves in many antagonistic Christian confessions, hating and contesting each other, their attitude being a negative missionary witness in front of other religions and the civil society. Although taking part in this movement of dialogue among Christians of different confessions, the Orthodox Church considered that the unity of non-Orthodox Christians divided among themselves over time can be restored only on the basis of the faith of the undivided Church of Christ, which is the Orthodox Church, the One, Holy, Catholic and Apostolic Church that we confess in the Orthodox (Nicene-Constantinopolitan) Creed.

The clergy, monastics and lay people involved in actions of rebellion and denigration of the Council in Crete, ignoring the fact that a Synod can be judged only by another Synod, will be called to order by peaceful dialogue and canonical explanation about the gravity of disunion and of disturbing the peace and unity of the Church. In the same manner, disciplinary administrative and canonical sanctions will be applied in order to bring to order clerics, monastics and lay people who persist in their state of rebellion and disunion, troubling the peace and unity of the Church.

It has also been recalled that if the synodal Fathers who participated in the Second Ecumenical Council (381) made 3 omissions and 10 additions or amendments to the text of the Creed formulated by the Holy Fathers of the First Ecumenical Council (325), in order to clarify and complete the initial Synodal text, all the more a future Holy and Great Council of the Orthodox Church can explain, nuance and develop the documents formulated and approved by the Council in Crete, in order to avoid misinterpretations that harm the peace and unity of Christ’s Church. In this regard, it is also noteworthy the decision of the Holy Synod of the Bulgarian Orthodox Church which, even though brought certain critical observations and proposed future amendments to some documents of the Council in Crete, decided: “to maintain fraternal, Eucharistic, spiritual, dogmatic and canonical communion with all local Orthodox Churches – both with those who participated in the Council in Crete and with those who did not participate”.

In conclusion, any explanation regarding the exposition of Orthodox faith must be given within ecclesial communion, not in a state of rebellion and disunion, because the Holy Spirit is, at the same time, the Spirit of Truth (cf. John 16:13) and the Spirit of fellowship or communion (cf. 2 Corinthians 13:13).

Press Office of the Romanian Patriarchate