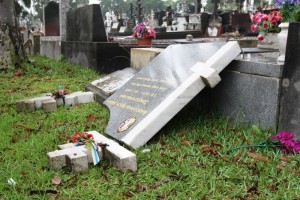 PHOTO: One of the more than 70 gravestones lies broken after vandals desecrated the Russian Orthodox and Serbian Orthodox areas of Rookwood Cemetery in Sydney. (ABC: Tom Gibson)

An unknown vandal or vandals during the night between Tuesday (09/12/2014) and Wednesday (10/12/2014) desecrated seventy six (76) graves in the Russian and Serbian Section No. 1 at Sydney’s Rookwood Cemetery.

We are amazed and saddened by this act of vandalism witnessed in the desecration of graves. Graves and cemeteries have always been, in all cultures and cultured societies, considered sacred places and, as such, were respected and spared even from enemy armies during times of war. We believe that such vileness belongs to the past and to other and different societies and cultures. We cannot believe that in the 21st century, in a perfectly harmonious multicultural society such as our Australian, someone would abuse their freedom and destroy the basis of culture that underpins our Christian civilization.

To the individuals and families whose deceased were subject to such disturbances and whose graves were desecrated, as well as the entire Russian and Serbian community, we express our sincere condolences for the pain inflicted on account of such misdeeds and for the damage done and the material loss that they have suffered.

Although the Serbian and Russian people are extremely sensitive to such atrocities resulting from similar experiences in their homelands and elsewhere, we find solace in our common Christian belief that the Lord sees all and that such deeds become the undoing of the perpetrators. Therefore we invite all to reconciliation and forgiveness, to remain faithful to their Christian convictions and appeal to a dignified stance and response worthy of our holy ancestors, who left us an example to defend ourselves from evil with charity, without revenge, and call for repentance.

On Saturday, 13 December 2014, at 15:00, with the blessings of His Eminence Metropolitan Hilarion and His Grace Bishop Irinej, in the Russian chapel located on the grounds of Section 1, Serbian and Russian clergy will concelebrate the Memorial Service on behalf of all those buried in these plots, and after the service all desecrated graves will be sanctified by censing and blessed with wine.

We have full confidence in the competent state institutions and authorities who are intensively searching for the perpetrators. We hope that they will be promptly identified and brought to justice. We also expect all demolished and desecrated monuments will be repaired in the near future at no cost to the families.