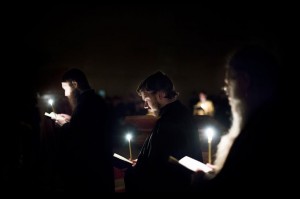 “Now we see it is not in any way true” that the Pope wants to subjugate the Orthodox Churches.

A leading Orthodox theologian has said that Pope Francis’s words while visiting Ecumenical Patriarch Bartholomew I in Istanbul “represent a big step forward.”

While speaking at the Patriarchal Church of St. George in Istanbul’s Phanar district Nov. 30, Pope Francis said that in the context of the efforts being made to achieve full communion with the Orthodox Churches, the Catholic Church “does not intend to impose any conditions except that of the shared profession of faith.”

“Coming from a Pope, those words are very powerful indeed and represent a big step forward, which the Orthodox will appreciate,” said Metropolitan Ioannis of Pergamon, who co-chairs the Joint International Commission for Theological Dialogue Between the Catholic Church and the Orthodox Church. “Because for many centuries, the Orthodox believed that the Pope wanted to subjugate them. And now we see this is not in any way true.”

Metropolitan Ioannis made his remarks in an interview withLaStampa’s Vatican Insider. “Professing the same faith is the only basis of our unity,” he said. “The question is recognizing what that same faith is; we need to profess this faith together in order for us to be in full communion.”

There’s no doubt that both Catholics and Orthodox have the same understanding of the basics of the Christian faith: the Trinity, the nature of Christ, the priesthood and the Seven Sacraments. The question is whether, for restoration of full communion, an agreement on a common faith would also include various doctrines that were defined after the first Seven Ecumenical Councils, ending with the Second Council of Nicaea in 787. Those are the only councils that the Orthodox acknowledge.

“For us members of the Orthodox Church, the common faith that makes full communion possible is the one professed in theseven Ecumenical Councils of the first millennium,” Metropolitan Ionannis said in the interview. “We need to clarify, from a Catholic point of view, whether a common faith that allows for sacramental communion should also include certain doctrines and dogmatic definitions which were established unilaterally by the Catholic Church. This point needs to be clarified in order to determine what concrete consequences may derive from the Pope’s words at the Phanar.”

But in saying that the Catholic Church “does not intend to impose any conditions except that of the shared profession of faith,” is Francis saying that Rome will no longer insist on a papal primacy that includes authoritative juridiction over the Orthodox Churches? Not everyone is willing to go that far.

“Metropolitan Ioannis gives a very positive interpretation to what happened in Istanbul during the papal visit,” Paulist Father Ronald Roberson, associate director of the Secretariat for Ecumenical and Interreligious Affairs of the U.S. Conference of Catholic Bishops, told Aleteia. “But personally I would not go beyond what the Pope actually said. He might be implying those things about Rome’s authority in the East, but maybe not. I think there is simply no way to tell at this point.”

Metropolitan Ioannis said in the interview: “If the reference criterion being looked at were the shared understanding of the role of the Bishop of Rome which prevailed in the first millennium, then there would be no problem. We know that in the second millennium, different conceptions of the papacy emerged,” he said.

He also said Pope Francis “has given some very important signs that give us the hope that quick progress will be made in achieving full communion. The way in which he is carrying out his ministry removes the many apprehensions and fears of the past. With the current Bishop of Rome we are seeing a ministry of charity and service. And this really is a big step forward.”

It caught the attention of many in the Orthodox world when Cardinal Jorge Mario Bergoglio, newly elected to the papacy, presented himself as the “Bishop of Rome.” He has used the phrase often in subsequent appearances and addresses, suggesting to some that he is trying to return to an understanding of Rome as one Church among several apostolic sees.

Some Orthodox also took note of Pope Francis’ gestures in Istanbul, in particular, bowing before the Ecumenical Patriarch and asking for his blessing upon him and the Church of Rome.

“I think it’s not just a symbolic gesture. It’s a profound gesture of humility, of recognition that matters, like authority and power are not seen as in the secular world. It was a profound statement of equality between the Pope and the Patriarch,” said a spokesman for the Ecumenical Patriarchate of Constantinople, Father John Chryssavgis.