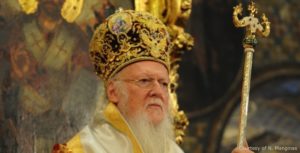 The Holy and Sacred Synod, under the chairmanship of His All-Holiness Ecumenical Patriarch Bartholomew, concluded its regular session, which took place between Thursday, April 19th, and Friday, April 20th. All the items on the agenda were reviewed and discussed and the appropriate decisions were made.
In accordance with the Divine and Sacred Canons, as well as centuries-old ecclesiastical order and Holy Tradition, the Ecumenical Patriarchate concerns itself with the preservation of Pan-Orthodox unity and the care for the Orthodox Churches throughout the world—especially of the Ukrainian Orthodox Nation that has received the salvific Christian faith and holy baptism from Constantinople. Thus, as its true Mother Church, it examined matters pertaining to the ecclesiastical situation in Ukraine, as done in previous synodal sessions, and having received from ecclesiastical and civil authorities—representing millions of Ukrainian Orthodox Christians—a petition that requests the bestowal of autocephaly, decided to closely communicate and coordinate with its sister Orthodox Churches concerning this matter.
At the Ecumenical Patriarchate, the 22nd of April, 2018.
Related Stories
Moscow frowns on moves aimed at church schism, says Kremlin – TASS Russian News Agency
Share. Twitter Facebook Pinterest LinkedIn Tumblr Email
Previous ArticleHow a church destroyed on 9/11 became mired in controversy
Next Article Patriarch, Synod, Grills Demetrios at April 20 Meeting