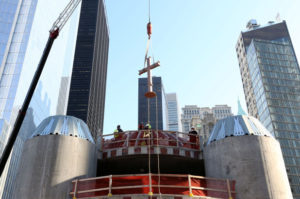 St. Nicholas Greek Orthodox Church was to be a “beacon of hope” at the World Trade Center site, glowing at night as a symbol to the faithful and those seeking solace on hallowed ground.

Thousands of visitors were to walk through the church doors on Liberty Street to worship, light a candle or just sit quietly in a nondenominational meditation room overlooking one of the 9/11 Memorial’s reflecting pools.

Now the church is a half-built eyesore, and when those doors will open is uncertain. The project has been stalled for five months and become a quagmire of accusations and millions of dollars in missing donations and cost overruns.

What was to be the proud symbol of the Greek Orthodox Church in America, and the only house of worship tending to the masses at Ground Zero, is now mired in controversy and second-guessing:

“The Greek Orthodox church was the only religious institution destroyed in the attack of September 11th, and it’s very important that we have a rebuilt church,” said David Emil, president of the Lower Manhattan Development Corp., the government agency formed to coordinate post-9/11 recovery. “It was destroyed. It needs to be rebuilt.”

Named after the patron saint of sailors, the church was the first stopping point for many Greek immigrants after they left Ellis Island. As skyscrapers went up around it, the modest church added one floor to the whitewashed structure that sat, for years, in the shadow of the Twin Towers.

The building was reduced to a ruin when the south tower collapsed on Sept. 11, 2001.

Archbishop Demetrios, head of the Greek Orthodox Church in the US, met almost immediately with then-Gov. George Pataki to discuss rebuilding, which Pataki backed. 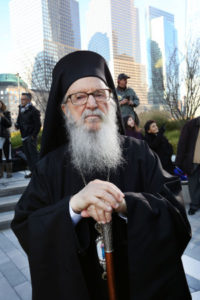 But it would take another decade for all sides to reach a land-swap agreement on relocating the church to the PA-owned property on Liberty Street. The church even sued the PA in 2011.

Cuomo quietly engaged a construction expert to help bring the parties together and get the project moving.

“Now we are finally returning this treasured place of reflection to where it belongs,” Cuomo said when the agreement was announced in his Manhattan office in October 2011.

The church sits on top of the vehicle security center for the new World Trade Center complex, and the PA did $18 million worth of work to prepare the site, including building a 4-foot thick concrete mat that is the shrine’s base.

Meanwhile, a massive fund-raising effort had begun in earnest. Millions poured in from the flock, but large donations also came in from wealthy Greeks, the Greek government and even from other faiths, including the American Jewish Committee and the Catholic Archbishop of Boston. By December 2017, the Greek Archdiocese had amassed $49 million in pledges, of which $37 million had been collected.

In October 2014, 2,000 people attended a “ground blessing” for what was declared the St. Nicholas Greek Orthodox Church and National Shrine, which was to be completed by the end of 2016.

In a bold, and expensive, move, the Archdiocese hired Spanish “starchitect” Calatrava to design its new cathedral.

Calatrava was behind the Oculus, the winged building just north of the church that is the trade-center transit hub, a taxpayer-funded project where costs soared from $2 billion to $4 billion.

Not everyone at the archdiocese was happy with the choice.

“Were you not told, before Mr. Calatrava was chosen, that if you choose him as the design architect, the budget would surely be at least double what was originally estimated?” Jerry Dimitriou, a former executive director of the archdiocese, wrote to the archbishop in January 2018.

Calatrava’s design called for a dome to be surrounded by four pillars. The church would use the same Greek marble mined for the Parthenon and a lighting system that would produce an evening glow.

As the project went forward, design changes kept pushing up the construction costs. Who is to blame is a matter of debate.

By one accounting, the archdiocese requested the use of the marble, as well as marble ornamentation in the church, plus a redesign of the dome and entry.

Calatrava proposed an additional staircase on Liberty Street to reach the elevated shrine and new detailing on an exterior wall, which the archdiocese approved, according to a document viewed by The Post.

But one project source said some of the archdiocese’s suggestions — such as a request for a larger icon of Christ on the inside of the dome — were met with outsized adjustments.

“Instead of making those slight modifications, Mr. Calatrava redesigned the entire dome,” the source said, adding $1 million more to the change cost.

The design and construction of the exterior cladding that Calatrava designed with 2,500 marble and glass panels cost about $10 million, the source said.

“Mr. Calatrava designed one of the most complex and unique churches ever built in America, on sacred ground, which is also the most expensive construction site in America or possibly the world,” the source said. “All those who are now ‘surprised’ that the star architect they hired built a unique and very expensive church, should not be.”

A spokeswoman for Calatrava said that his firm had met all of its contractual obligations with the archdiocese and that it was “committed to ensuring the completion” of the shrine.

Those familiar with the archdiocese said its 90-year-old leader, Archbishop Demetrious, is ultimately responsible for signing off on design changes.

“It’s a cultural thing. You don’t want to tell the archbishop, ‘You’re wrong. You can’t do it,’ ” a source said. “When he walks into the room, everybody goes over and kisses his hand, literally.”

“Unfortunately, by paying that deference, we’re also paying the price,” the source said. 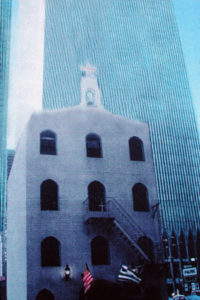 The price for construction alone rose to almost $60 million, and that was on top of what the archdiocese had already spent on legal fees and consultants, said a source familiar with the project.

At the same time, the archdiocese was descending into a financial crisis unrelated to the project and grappling with a $5 million deficit, leaders admitted in the fall. It cut staff and restricted travel and credit-card use.

The archdiocese’s treasurer reported in October that the organization lacked proper internal controls and that $4.75 million was transferred from a restricted account to fund the deficit.

Although the nature of the account wasn’t specified, the priest in charge of fund-raising for the shrine said in December that there would be a probe into “how funds were transferred from the St. Nicholas account” and that they would be returned.

“They were robbing Peter to pay Paul,” a high-ranking lay source familiar with the archdiocese’s operations told The Post. “As the money was coming in for St. Nicholas, they themselves as an archdiocese were going broke.”

In an e-mail sent out this month in anticipation of a government probe, Bishop Andonios Paropoulos warned archdiocese employees not to destroy any documents because doing so “could be considered an obstruction of justice.”

It is unknown whether missing shrine-donation money was improperly transferred and spent, or if someone pocketed the cash.

The US Attorney’s Office and attorney general have declined to comment.

In December, the main contractor, Skanska, abandoned the St. Nicholas site because it was not being paid. 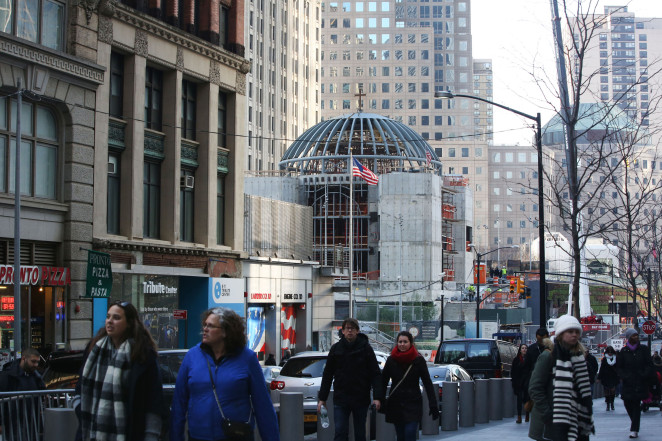 The archdiocese, which hired the high-powered Rubenstein public-relations firm, has said little about the crisis.

It issued a statement this month saying it was conducting an internal probe of the project’s finances and had already alerted the AG’s office of “certain concerns discovered while reviewing financial records (payroll and credit-card statements)” of the archdiocese.

A Rubenstein rep said there was no comment on the mortgage the archdiocese intends to seek from Alma Bank.

The bank was founded by Greek-Americans and has a close relationship to the church. Its president, Michael Psyllos, is part of a archdiocese council of decision-makers. An Alma Bank spokesman would not comment.

At least one elected official is calling for transparency.

“I understand that there are a lot of moving parts, which is why it’s important to have a full accounting of the project as well as a timeline for completion,” said Assemblywoman Yuh-Line Niou, who represents the area.

“Transparency throughout this project is important, especially because of what this resurrection means to our community in lower Manhattan.”