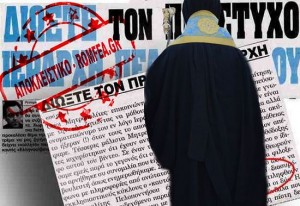 Athens – The editor-in-chief and the publisher of the Greek Akropolis newspaper have been sentenced to several months imprisonment, reports Romfea.

The charge of the trial court sounds unambiguous: for repeated defamatory publications against head of the Church of Greece, the Archbishop of Athens, and other hierarchs.

After the hours-long hearings the court found the editor-in-chief and the publishing editor guilty of the libelous publications that had allegedly threw light on the relationships inside the Church connected with the hierarchs’ alleged connivance in the moral state of the clergy of the Church of Greece.

At the hearings the Church representatives clearly demonstrated that the published materials had nothing to do with reality.

It should also be noted that since the very beginning of the judicial proceedings,the newspaper’s owner and executive director through their attorney offered their apologies for what they had written about the Archbishop of Athens. Their sentence is confined to only a heavy fine.