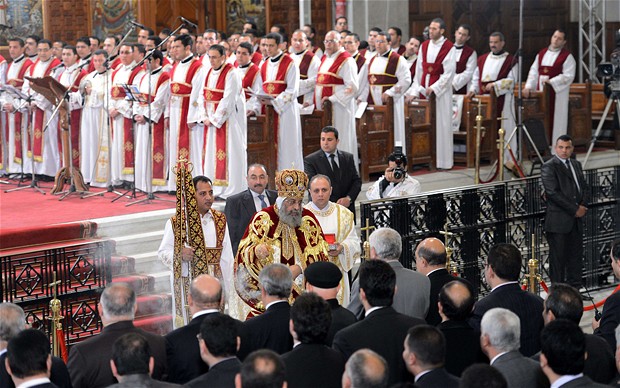 Egyptian troops foiled a bomb attack on a church in the frontier town of Rafah timed to coincide with Coptic Orthodox Christmas, the authorities said on Monday.

Army units received a tip-off about the attack, and in the early hours of Monday morning, Coptic Christmas Day, discovered a Toyota car packed with explosives and weapons near the church, according to the state news agency.

Another car driven by masked men then sped off.

A second report said the intended target was a nearby military base that has been attacked by Islamist militants before, but the incident highlights the increasing uncertainty felt by many of Egypt’s substantial Christian minority in the wake of the recent upsurge in radical Islamist politics.

Last September, the entire Christian community of Rafah left in protest at what it said was a lack of state protection in the face of Islamist threats. Some families returned after being given assurances of their safety by President Mohammed Morsi. The church itself is unused, having been burned down during the revolution.

Rafah is particularly vulnerable to militant Islamist unrest. It is sited in the Sinai, parts of which have become lawless with the collapse of security since the revolution which overthrew ex-president Hosni Mubarak.

It is also home to the Hamas and Islamic Jihad smuggling tunnels used to supply Gaza during the Israeli blockade.

President Morsi sent a New Year goodwill message to the Christian minority, thought to number between 6-8 million of a total population of 85 million, describing Egypt as “one homeland for all”.

But thousands of Christian families are thought to have left the country since the revolution, most recently in response to a new constitution drafted by an Islamist-dominated assembly that gives greater prominence to Sharia law.