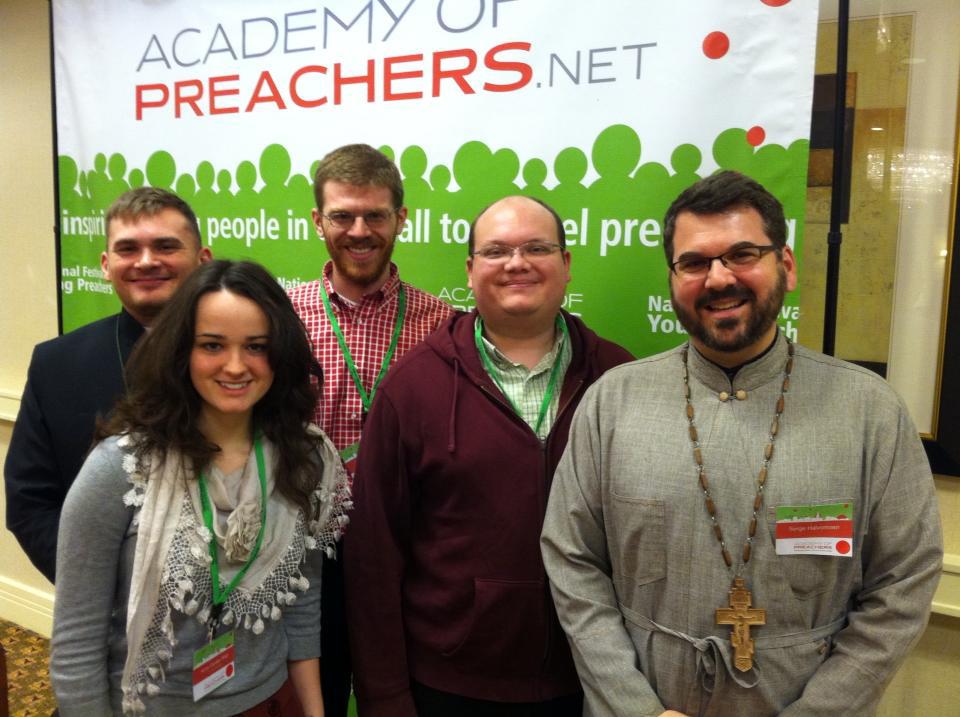 Representatives of the OCA at the National Festival of Young Preachers

The Orthodox Church in America’s Department of Youth, Young Adult, and Campus Ministry was represented at the National Festival of Young Preachers in Atlanta, GA January 2-5, 2013. Sponsored annually by the Academy of Preachers, this festival brings together young Christians between the ages of 16 and 28 for three days of preaching, fellowship, and education. This year’s theme was “The Gospel and the City.”

Each young preacher delivered a 16-minute sermon on the theme and a selected passage from scripture during the festival. They also attended preaching workshops offered by seminary professors and took advantage of opportunities to reflect and work on their sermons in small peer group sessions.

Representing the OCA were Andrew Boyd, OCA Director of Youth, Young Adult, and Campus Ministries, and Ms. Anna Vander Wall of Trinidad, CO, who won the department’s recent “Youtube Challenge”. Andrew delivered a sermon on Acts 1:6-11, reflecting on what it means to be a witness to Christ in our time and place. Anna’s presentation focused on Psalm 137 and on our exile from God’s Holy City.

Two OCA students from Saint Vladimir’s Seminary also participated in the festival—Harrison Russin and Priest James Parnell, both of whom are in their final year of the Master of Divinity program. Priest Sergius Halvorsen, the seminary’s Assistant Professor of Homiletics and Rhetoric, served as the mentor for all four of the OCA participants. Father Sergius also led a workshop at the festival, titled “Sacramental Preaching,” in which he used the Nativity Icon as an example of the powerful, scriptural images one can create in listener’s minds through our words. This year’s festival saw the strongest Orthodox representation to date.

Youtube videos of the four Orthodox participants’ sermons will be posted on the OCA Youth Facebook page as soon as the Academy makes them available. Transcripts of the four sermons will appear in the February 2013 edition of “Wonder”, the Youth Department’s blog.

“I encourage all of our young people to consider attending this annual national event or similar regional events sponsored by the Academy,” said Andrew. “In the future, we will be making more funding available to help cover the costs of attending such events. While liturgical preaching in the context of the divine services is usually reserved for our clergy, preaching Christ’s Gospel and giving ‘a good defense for the hope within in us’ is a necessary skill for every Christian.”

“Everyone I met at the festival was genuinely interested in Orthodoxy,” added Anna. “Most had heard of it but were curious to learn more about its history and teachings. I was encouraged that most of the young people I interacted with were very optimistic about the power of Christianity in healing a broken world. I left the festival strengthened in my faith.”