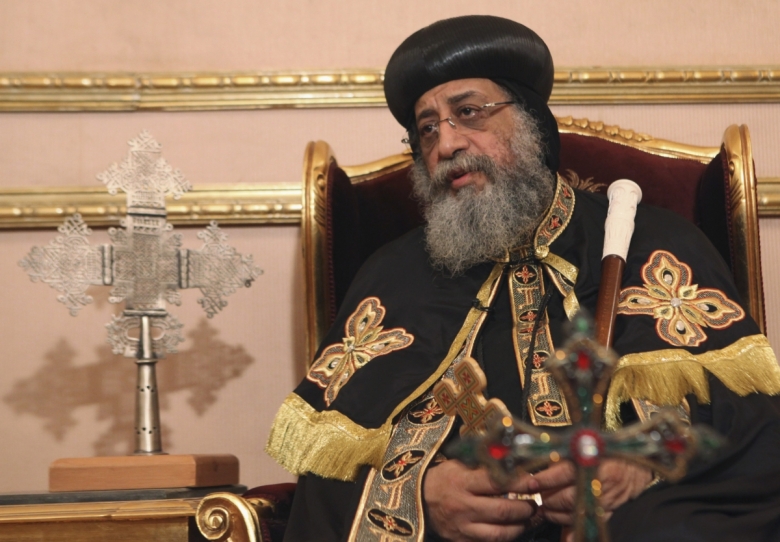 Coptic Pope Tawadros II, head of Coptic Orthodox church, talks to Reuters during an interview in Cairo, April 25, 2013. Egypt’s Christians feel sidelined, ignored and neglected by Muslim Brotherhood-led authorities, who proffer assurances but have taken little or no action to protect them from violence, the pope said. In his first interview since emerging from seclusion after eight people were killed in sectarian violence between Muslims and Christians this month, the pope called official accounts of clashes at Cairo’s Coptic cathedral on April 7 “a pack of lies”. Picture taken April 25, 2013.PHOTO: REUTERS / ASMAA WAGUIH

Coptic Orthodox Pope Tawadros II has xpressed his support for the ousting by the military of Egypt’s President Mohamed Morsi this week and was joined by a leading Muslim cleric.

Coptic Orthodox Pope Tawadros II expressed his support for the ousting by the military of Egypt’s Islamist President Mohamed Morsi this week and was joined by a leading Muslim cleric.

A statement by the new administration said that Grand Imam of al-Azhar Ahmed el-Tayyib, Pope of Alexandria and Patriarch of Saint Mark Diocese Pope Tawadros II and Leader of the Constitution Party Mohamed el-Baradei have expressed their support for the future roadmap announced by General Abdel Fattah el-Sisi.

News agencies reported Saturday that a Coptic priest in Egypt’s Northern Sinai had been shot dead, in one of the first known sectarian attacks since the military overthrow of Morsi

Christian workers reflected on the spiritual need of the huge numbers of people protesting in Cairo’s Tahir Square.

Before the coup many Christians protested about increasing harassment during sectarian violence in Egypt.

Pope Tawadros II was present with other Egyptian leaders as Gen. Abdel announced on Wednesday that the military was stepping in to end the unrest.

On Tuesday, the Egyptian official news agency Al-Ahram said that the Coptic Pope tweeted, “It is wonderful to see the Egyptian people taking back their stolen revolution in a peaceful way, through the idea of Rebel and its youth.”

The Rebel Campaign was launched in May and said on Saturday it had collected 22 million signatures calling for the removal of Morsi.

Earlier, Pope Tawadros II had said, “A salute, in tribute and glorification, to the trio that makes Egypt great: the people … the army … and youth.

J. Dana Stuster of Foreign Policy magazine said that el-Sisi surrounded himself with a wide array of Egyptian officers, politicians, clerics and academics during his announcement.

Also present with Pope Tawadros II were such Egyptian notables as Mohamed El Bareidi, an opposing politician and Nobel Laureate, and Sheikh Ahmed el-Tayeb, the grand imam ofAl-Azhar Mosque and University and an authority of Sunni Islam.

They were also joined by Mohamed Badr, the organizer of the Tamarod campaign which led to the protests and Sekina Fouad, a former advisor to Morsi who resigned because the president had placed his actions above judicial review.

A live camera from Tahir Square showed a large crowd there even in the early hours of Thursday morning.

Eden Nelson of Baptist Press (BP) reported the reflections of Christian workers in Egypt who witnessed the protests. BP used pseudonyms to protect their identities.

Media reports have noted that there have been at least 90 sexual assaults on women in Tahir Square of late.

“It’s not just riots and chaos, this is opportunity,” says Stein, “For the first time in hundreds of years people are questioning everything. This is the greatest opportunity we have had in a long time in a city that is promised to the Lord.

“It wrecks my heart to know that people are dying without hearing the Good News.”

Other workers called for prayer, according to BP.

“Tahrir Square is where people go to voice their opinions,” said Rye Martins, “The square has come to be a symbol for change and people looking for hope.”

“As they go to the square, pray they will find a spiritual revolution that is greater than any political revolution,” Martins said.

Jack Logan, a Christian worker in the Middle East, asked that when viewers watch the protests on television, they will see the humanity of the people.

“If you look at the pictures, there are grandmothers and teenagers out in the streets; these are real people, with real families, with real problems,” he said.

“Pray that people will encounter Jesus Christ, however that happens in this time, whatever the medium, that He will be glorified in all of this,” said Logan, “that His kingdom will come and that His will be done.”