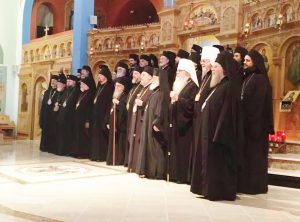 CLIFTON, NJ [OCA]  The eighth annual meeting of the Assembly of Canonical Orthodox Bishops of the United States of America opened on Tuesday, October 3, 2017 with the celebration of Orthros and the Divine Liturgy at Saint George Greek Orthodox Church, Clifton, NJ.

His Beatitude, Metropolitan Tikhon and members of the Holy Synod of Bishops of the Orthodox Church in America are among the hierarchs in attendance at the meeting, which continues through Thursday, October 5.

The Episcopal Assembly—comprised of the hierarchs from all canonical Orthodox Christian jurisdictions in the US—is tasked with preserving and contributing to the unity of the Orthodox Church in North America.

The bishops commenced their work with the opening address of the Assembly Chairman, His Eminence, Archbishop Demetrios of the Greek Orthodox Archdiocese of America, on Tuesday afternoon.  A presentation titled “Youth and American Culture,” offered by Dr. Richard Flory, followed.  The hierarchs also viewed the highly acclaimed feature length film, Becoming Truly Human, which offers an interesting and important glimpse into the growing number of Americans who consider themselves “religiously unaffiliated.”  See related story.

On Wednesday, October 4, the bishops will receive an update from the Orthodox Christian Fellowship and attend a presentation by Dr. Ann Bezzerides, titled “Fundamentals for Emerging Leadership: Key Questions to Frame a Hopeful Future.”  A session also will be devoted to Canonical Regional Planning.

A statement will be issued after the closing session on Thursday.  Additional information will be posted as it becomes available.