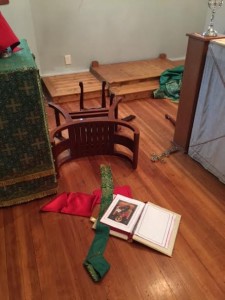 At 8:19 p.m. on the evening of Wednesday, June 10, 2015, Archpriest Innocent Dresdow was startled to receive a call from Kodiak Police Dispatch.  Asked to meet police officers at Holy Resurrection Cathedral, he was told not to go into or near the church, as it was “an active crime scene.”

“I arrived on scene at 8:25 p.m. and met up with responding officers across the street from the cathedral,” Father Innocent said in the initial report he sent to His Grace, Bishop David of Sitka.  “The lead officer related to me that the cathedral had been broken into and that a suspect had been apprehended in the church yard.  He called the damage to the interior of the church ‘severe.’”

Father Innocent did not recognize the suspect’s name, but he was told that he “was fairly new to town.”

“Once detectives allowed me to enter the cathedral, I was able to view the damage first-hand and answer any contextual questions,” Father Innocent continued.  “There was broken glass everywhere.  Curiously, a cruise ship had been in Kodiak earlier on Wednesday and hundreds of tourists had visited the cathedral. At the candle stand was a money plate with cash donations, but it was untouched. It appears that the suspect targeted only the most sacred things—the windows were the only ‘non-holy’ items damaged.” 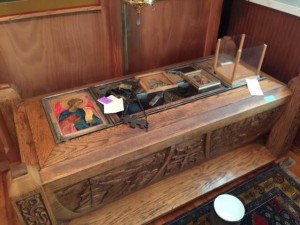 While the relics of Saint Herman of Alaska, which are enshrined in the cathedral, were not disturbed, Father Innocent noted that seeing the reliquary brought him “to tears.”  Saint Herman’s skufia and wrought iron cross and chains were in disarray and displayed no visible damage; his monastic cross clearly had been vandalized.

“Prayer requests that pilgrims had left at the reliquary were scattered on the floor, but there was no visible damage to the carved reliquary,” Father Innocent added.  “Fortunately, the locks on the interior coffin were undisturbed.”

The greatest damage occurred in the cathedral’s altar.

“While the Table of Oblation remained untouched, there was a great deal of damage to the Holy Altar Table and High Place,” said Father Innocent.  “The Gospel Book sustained substantial damage and was open, while the primary antimension was found on the floor, wrinkled but otherwise undisturbed.  The Holy Chrism bottle was broken, but the altar crosses—gifts from His Eminence, Archbishop Justinian—had been bent.  Since the Reserved Mysteries had been strewn on the floor—apparently the tabernacle and its plexiglas dust cover had hit the floor when the altar cover was ripped away—I meticulously cleaned the floor of every particle I could locate and placed them in a chalice with a little wine and warm water, knowing that there was certainly some glass and other contaminates, and consumed them.” 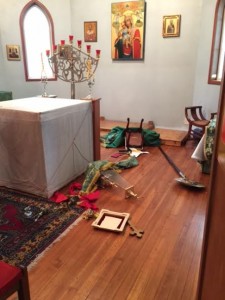 Other items—additional antimensia, liturgical fans, icons, censers, vestments, etc.—were strewn about but did not sustain permanent damage.  A bloodied garden shovel, apparently used in the initial break-in, was found at the front door and taken by detectives as evidence.

“By midnight all the windows were boarded up and as much glass as possible had been picked up, swept and vacuumed by not only cathedral faithful, but also others from the community at large,” said Father Innocent.”

“Fortunately, nothing was lost, but there is much that is damaged,” said Bishop David.  “I ask your prayers for Father Innocent and the cathedral family, the investigators and the perpetrator.”