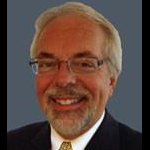 Marangos appears without the cleric’s regalia but instead with suit and tie. No mention is made that he is or he has been a Greek Orthodox priest, but he is simply identified as “Dr. Frank Marangos.”

TNH asked Archbishop Demetrios via written request for comment if he had given Marangos permission and consent to join the O’Meara Company, if Marangos continues to be a priest of the Archdiocese and the Cathedral, and if the Archdiocese paid his salary and the benefits during the time he was not performing his priestly duties at the Cathedral, but the archbishop has not responded, either.

O’Meara has posted the following about Marangos on its website: “Throughout his 34 years of experience, Dr. Frank Marangos has had extensive experience with religious, educational, business, and non-profit entities providing organizational consulting, assessment, leadership development, instructional training, strategic fundraising, communication, and personalized coaching. His has doctoral degrees in Adult Education (EdD) and in Ministry and Childhood Education (DMin). He is also a Certified Practitioner and Interpreter of Myers-Briggs Type Instruments (MBTI), providing vital psychometric information for leadership, teambuilding, professional learning communities, and organizational development. Further, he brings a multi-faceted set of experiences with regard to organizational planning, development, and training. Dr. Marangos has traveled throughout the United States conducting education seminars, leadership development programs, parish strategic planning and stewardship programs, retreats, and teacher training workshops. He has taught at several theological schools and Christian universities, and a nationally Certified Distance Learning Leader with expertise in developing interactive CD-ROMs, and conducting on-line learning courses.

“As founder and CEO of OINOS Educational Consulting Company and a Senior Business Coach and Consultant for AWAKE Consulting Group, Dr. Marangos has provided training and support to entrepreneurial leaders on a variety of business and marketing strategies. He has been invited to participate in national and international think tanks focusing on societal/religious issues hosted by the United States Government (SAG) and Oxford University.

“Dr. Marangos has a plethora of experience in the areas of fundraising and strategic planning, as well as financial oversight. He was responsible for the development/implementation of a $5 million capital campaign that led to the design and construction of a national architecturally award-winning church sanctuary. He has developed thematic, multi-year stewardship campaigns that have enlarged parish memberships and increased operational revenues by 300%. Dr. Marangos’ leadership experience also includes the development of a five-year educational strategic plan. He has successfully authored numerous faculty grants and conducted various comprehensive analyses, including a national SWOT effort that involved the development and validation of an organizational climate instrument. He has designed and facilitated environmental scans, interpreted data, and generated organizational focus goals to meet parish needs.

“A highlight of Dr. Marangos’ career was his distinct privilege of assisting and synchronizing the logistical communication needs of the historic Papal Visit of the Holy Father, Pope Benedict XVI, with His All Holiness Patriarch Bartholomew I, the Ecumenical Patriarch of the Greek Orthodox Church, in Istanbul, Turkey. He was also personally awarded a Proclamation by the City Council of New York City for establishing and conducting a noteworthy Christian educational program for young professionals working in Manhattan.

Dr. Marangos is currently an adjunct assistant professor at Saint John’s University (Queens, NY) where he teaches various courses in Catholic Theology and has distinctive experience as an author, publishing numerous articles in theological publications. He is a regular contributor to several on-line Christian radio programs, and continues to write feature articles for Praxis Magazine, a national periodical for religious educators, that he founded and managed as executive editor for nearly a decade.

“Our mission is to provide Catholic organizations with advice and counsel on the best possible use of their temporal resources as they work to further their missions.

“Since its inception in 2000, O’Meara Ferguson has established itself as both an innovator and an authority in Church-related project financing and financial matters.

“We have arranged project financing that has enabled over $1 billion of construction for 100 separate facilities including cathedrals, convents, monasteries, parishes, high schools, and Catholic Charities facilities. Additionally, O’Meara Ferguson has provided counsel on some of the most successful diocesan fundraising campaigns, raising nearly $1 billion in gifts and managing the efforts of tens of thousands of campaign volunteers.

TNH wrote extensively on March 10, 2011 about the Cathedral’s problems and the disputes between Marangos and members of the parish council. Demetrios effectively removed Nicholas Koutsomitis from the presidency by not renewing his tenure. He also removed many other members of the parish council who reportedly disagreed with Marangos and appointed Cherpelis to be president of the Council.

The Cathedral is the only parish of the Archdiocese whose council is not elected by the members of the parish; its members are appointed by the Archbishop. That policy began with the late Archbishop Iakovos and it continues under Demetrios.

Marangos had been absent from his position since July 1. He did not participate in June’s parish council meetings, and did not liturgize during the months of July and August. He had requested from the Archdiocese and was granted medical leave with pay through August 14 due to some health concerns.

After that, he departed for a three-week vacation and was supposed to return to his priestly duties on September 4, but he did not. He was also not present on September 11 when Demetrios celebrated the Divine Liturgy and presided over the memorial service for the repose of the souls of the victims of the September 11, 2001 terrorist attack.

Marangos presented the Cathedral with an ultimatum with three conditions for the return to his duties: “Certain members of the parish council must be dismissed. The parish council must immediately stop the financial audit it has launched which goes back six years and includes matters pertaining to priests’ expenses and compensation and the Archbishop to publicly declare that he is the Dean of Holy Trinity Cathedral.”

The Archdiocese refused to satisfy his ultimatum and as a result he did not return to his priestly position.

Marangos was appointed Dean of the Cathedral in 2007, succeeding the long-serving Rev. Dr. Robert Stephanopoulos. Marangos had served as the Director of the Religious Education Department of the Archdiocese. In 2006, he was appointed Director of Communications at the Archdiocese on the recommendation of Vice-Chairman of the Archdiocesan Council Michael Jaharis. Marangos’ tenure lasted for just a short period of time due to conflicts with other officials in this Department who he said would not let him perform his job.

Demetrios removed him from the Communications Department and appointed him Dean of his Cathedral, again on Jaharis’ recommendation.