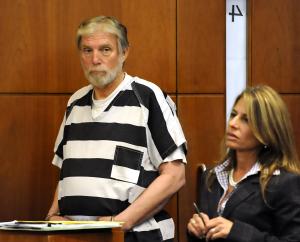 Clutching a handwritten apology, a former Fairfield pastor asked for forgiveness in front of a packed courtroom just before being sentenced to 18 years in state prison for the molestation of children at his parish.

Robert E. Ruark, 65, of Suisun City, a former reverend at St. Timothy Orthodox Church, received the sentence in Solano County Superior Court after pleading guilty in January to 19 felony counts related to committing lewd acts on children. The molestation allegations spanned as far back as 1994.

Known by parishioners as “Father Silas,” Ruark was arrested in June by Fairfield police and charged by Solano County prosecutors with more than 30 counts of committing lewd acts on children as young as 13 and, in some instances, photographing them while naked, according to police. The victims told detectives the majority of the molestations took place both at the church on Central Way in Cordelia when they were left alone with Ruark and at his home, according to Fairfield Lt. Greg Hurlbut.

“I am deeply and profoundly sorry for my actions. We were a family,” Ruark said.

Wearing jail stripes and shackled at his legs and waist, Ruark said there was no justification for what he had done.

“I betrayed your trust,” he added.

Ruark’s defense counsel, criminal defense attorney Amanda Bevins, said resolving the case without going to trial was what Ruark wanted from the start.

“He did not want to inflict any additional pain on any of the
victims,” Bevins said.

The Rev. John Christianson, read a statement on behalf of one of the victims. The victim said he had stayed quiet about the abuse for 17 years, until a group of youth brought their allegations against Ruark last year.

“I thought I was the only person involved,” he continued.

Prior to joining the church, Ruark spent 22 years serving in the U.S. Army criminal investigation unit and followed that with a stint as chief investigator for Solano County Health and Social Services.

A former evangelical Protestant volunteering with Prison Fellowship Ministries at California Medical Facility in Vacaville, Ruark began a three-year program at St. Stephen’s School of Orthodox Philosophy in 1994 and was ordained as a priest in 1997.

Judge E. Bradley Nelson noted that Ruark had betrayed the trust of not just the victims in the case, but also the principles of his religion, church and God. He also offered kind words to the victims, telling them to do their best living out the rest of their lives.

Nelson ordered Ruark to pay a $10,000 restitution fund fine and an additional $162 to the state Victim Compensation Board. Nelson said he would consider additional restitution claims as they are received.

Ruark must register as a sex offender and will be subject to 10 years on parole if released from prison. Because the nature of the crime, Ruark must serve 85 percent of his sentence before becoming eligible for parole.