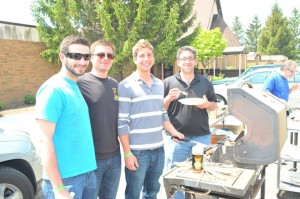 At its recently adjourned board meeting in Akron, Ohio (May 30, 2014), four OCL members were elected to the Board of Directors.  Each member is passionately committed to Orthodox Christian Unity.  The variety of ages and interests of the new members will strengthen the vision and mission of OCL.   The new board members are:  Ellen Pantazis, Ocala, FL (GOA);  Michael Pacurar, Long Beach CA and Akron, OH (OCA); John Regule, The Villages, FL (OCA); and Roy Snyder, St Louis,  MO (Antiochian Archdiocese).

Ellen Pantazis has had professional experiences as an educator and technology coordinator.  She also is a fundraiser, organizing tours to help nonprofit organizations raise funds.  She is a homemaker, grandmother, mother and daughter.  She is married to Dr. Cooley Pantazis, who is an MD pathologist.    They live in Ocala and were members of the founding committee and benefactors of St. Mark’s Greek Orthodox Church, Bellevue, FL.

Michael Pacurar is a building contractor and entrepreneur with interests in communication, film, and real estate.  He is involved in the life of the Church on many levels working with the Romanian Episcopate (ROEA) on the parish level and as a youth organizer, camp counselor and developer of the Annual Pan Orthodox Unity Festival for young adults in the Midwest. He has served on the American Romanian Orthodox Youth (AROY) board as National Sports Director.  He has shared his experiences and insights with OCF College Conference East at Antiochian Village and at the OCF Student Advisory Board Training in Michigan.

John Regule is a retired judge and attorney.  He has been active in the life of the Orthodox Church for his entire life, serving as Parish Council President on the local level (Holy Cross Orthodox Church, ROEA/OCA) and President of the American Romanian Orthodox Youth (AROY), the Orthodox Brotherhood (National Philanthropic organization, ROEA) as well as legal advisor of the Romanian Orthodox Episcopate of America (ROEA), the latter for over forty years.  In addition, he was a founder and is still a member of the governing board of Holy Transfiguration Monastery, Ellwood City, PA.  Originally from Sharon, Pennsylvania, he now lives in The Villages, FL.

Roy Snyder has work experiences in academia, in the intelligence community of the Armed Services and as a business owner. He presently owns and operates Visiting Angels of Greater St. Charles, a service company providing non-medical, in-home, living assistance services to seniors.  He has broad community service experiences and has served as Parish Council member of All Saints of North America Antiochian Orthodox Church in suburban St. Louis.

OCL is the independent voice of Orthodox Christianity in the United States.  You can find out about the work of OCL by visiting www.ocl.org.  Check it out and sign the petition for Orthodox Unity.