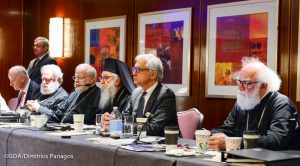 From the meeting of the Archdiocesan Council in New York. Shown are Metropolitan Savas of Pittsburgh, Methodios of Boston, Archbishop Demetrios of America, George Tsandikos, Metroplitan Alexios of Atlanta. Photo: GOA/Dimitrios Panagos

NEW YORK – The economic situation of the Greek Orthodox Archdiocese of America is much more serious than thought before. The National Herald has learned from within the recent meeting of the Archdiocesan Council that the deficit actually is $12.75 million.

The deficit includes a transfer of $4.75 million made from the restricted accountsof which $2.5 million was from St. Nicholas at Ground Zero rebuilding fund. The transfers were made to the Archdiocese’s general operating accounts, which violates is own regulations and may cause legal problems.

Another $4 million is in deficit since checks have been issued waiting in a box at the Archdiocese to be mailed out for paying bills, but there are no funds in the bank.Also, there is a problem with the pension of the priests, about $3 million.

More than 30 personnel were fired that cost in salaries and benefits more than $6.5 million per year.

The Archdiocesan budget, which was set at $30 million for 2018 will be reduced to $22million. No increase will be asked of the parishes. Many parishes already have reduced their annual allocations to the Archdiocese or intend to stop them altogether until a detailed financial report is published in TNH.

Archdiocesan Council Treasurer Michael Psaros delivered a speech on October 20 at the Council’s open meeting on the finances.He presented concrete and decisive proposals designed to turn the finances around and emphasized the need for total transparency. He said that by its nature and mission, the Archdiocese “must have accountability and transparency.

“I can confirm that we are exceedingly disappointed that Fr. (Soterios) Baroody discovered transfers involving funds in restricted and custodial accounts of approximately $4.75 million. We believe that the funds in these accounts were transferred to fund the GOA’s legacy operating deficit. We are proceeding with an examination of all transfers, and will engage an accounting firm to confirm the specific nature of those transactions. We understand it is imperative that all avenues be explored to restore the proceeds to these accounts as soon as possible. We will pursue all options to do so. In the meantime, we believe that proper internal controls have been established to prevent this practice from occurring again.” (The speech is published in this issue in its entirety).

At the meeting, responsibility was placed on ousted Executive Director of Administration Jerry Dimitriou. It was said that he would hire a limousine to take him from the Archdiocese to the St. Nicholas site and back. He also traveled abroad, specifically to Austria, in order to choose the marbles for St. Nicholas. TNH has learned His Eminence Archbishop Demetrios Geron of America knew in great detail everything that was going regarding the finances, including St. Nicholas.

It was decided that the next Clergy Laity Congress of the Archdiocese will be held in Boston in July. George Behrakis, a prominent businessman and great benefactor of the Archdiocese, the Metropolis of Boston, the Ecumenical patriarchate, the Greek-American Community and Greece stood up and respectfully requested that the Congress not to be held in Boston since there is not enough time for preparation.Archbishop Demetrios directed that Behrakis chair the Congress, to which the latter replied he would not do so, and reiterated that it ought to not take place as scheduled.

The archbishop replied that it was discussed in the Eparchial Synod with the metropolitans, and Metropolitan Methodios of Boston has agreed. Behrakis insisted that he does not have to accept to chair the Congress and reiterated that it should not take place.

There was discussion about limiting the Congress to only two days due to the dire financial situation, but others said that wouldn’t be enough time as by the time everyone arrived to Boston it would be time to leave.

In the Finance Committee on October 19, a heated discussion took place about the finances. Some from the Chicago area began praising ousted Chairman George Vourvoulias. Also, Boston Metropolis Chancellor Fr. Theodoros Barbas praised Dimitriou, George Vourvoulias, George Papadakos, and also George Matthews, who resigned back in May. It is reminded here that for some reason Barbas also had praised in writing the above mentioned ousted individuals in an email to members of the Finance Committee as TNH reported.

Demetrios made every effort not to allow any discussions of TNH’srevelations about Vourvoulias, who received the sum of $900,000 from the Archdiocese during a ten-year period for travel expenses, even though he considered himself a volunteer. Committee members told TNH that Vourvoulias received $10,000 dollars per month by wire for the past eleven years. The archbishop attempted also not to allow any conversation about the grants of the Leadership 100 or the Registry.

Archdiocesan Council Vice Chairman George Tsandikos, who is also Chairman of Leadership 100, scrambled to defend the archbishop, emphasizing the benefits of the national ministries. He continued to repeat the word “unity.”

Demetrios admitted the existence of the huge deficit incurred on his watch, and said there are many millionaires who can pay it off.

TNH’s reporting was also mentioned. Some brought up that the archbishop initially said the information was false but two weeks later he verified it to be true. The same point was made during the open meeting, with Savas Tsivikos emphasizing that all TNH reported was correct.

An attempt was made to show the corrective efforts are underway, but the climate in the committees and also in the open sessions was dismal and benumbed.

The Council reaffirmed its strong commitment to implement appropriate controls and procedures at the Archdiocese; and also reaffirmed its dedication to accountability and transparency.

His Eminence Archbishop Demetrios of America in his opening remarks first conveyed the blessing and love of His All-Holiness Ecumenical Patriarch Bartholomew who, as the Archbishop said, “is very aware of our meeting here and has expressed his love and care.” The Archbishop quickly enumerated some of the important events since the last meeting of the Archdiocesan Council, including the falling asleep in the Lord of Metropolitan Iakovos of Chicago and Metropolitan Philotheos of Meloa, the beginning of the work for the new Saint Michael’s Home in Long Island, NY and the convening of the Eighth Assembly of Canonical Orthodox Bishops of the United States.

The Archbishop spoke of “the discovery of serious financial issues which have been at the center of our concern and discussion.” His Eminence publicly acknowledged the very hard work for these issues of the Vice President of the Council George Tsandikos, the Secretary Cathy Walsh, the Treasurer Michael Psaros and the Chancellor of the Archdiocese, His Grace Bishop Andonios of Phasiane. “They are very much engaged,” said the Archbishop, “in the very intensive work to establish the means and ways of overcoming this difficulty.” Archbishop Demetrios also said that the Holy Eparchial Synod dealt with these matters in a very sincere and open way. Expressing his resolve for transparency and accountability in all matters relating to the Archdiocese, His Eminence said, “For us there is something more than transparency and accountability. For us the ultimate criterion is a divine criterion, a criterion in the Gospel and from the Gospel and that is the truth. We have to be truthful to ourselves individually and we have to be truthful among ourselves as a community and we have to make truth a central issue in a world of falsehoods, distortion, a world of the post-truth era. The truth is not negotiable.”

Mr. George S. Tsandikos, the Vice President of the Archdiocesan Council in his address to the Council urged unity and truth. “It has been a challenging and trying year for all of us and, most especially, for our beloved Archbishop,” he said, and explained that “we have been confronted with some serious financial issues which have affected the daily functions of our Archdiocese. It has been painful for all of us when we are forced to reduce staff and make necessary budget cuts.” At another point of his remarks Mr. Tsandikos said to the members: “My commitment to you and all the faithful is that with your cooperation, we will leave no stone unturned and we will use our full abilities and resources to continue our path to address both the structure and procedures of the Greek Orthodox Archdiocese.”

Further, Mr. Tsandikos said that the Greek Orthodox Archdiocese of America has stood the tests of time and has had a profound and lasting impact in transforming lives and institutions at all levels of society. “Our accomplishments have been exceptional due to the committed men and women, families and youth who comprise our omogenia. We cannot discount these achievements in the face of financial and administrative issues. In fact, it is during these times that our role becomes ever more relevant and significant. We have the talent, ability, will and spirit, to find creative solutions to address these difficulties, always speaking truth in love, as His Eminence has reminded us.”

Mr. Tsandikos concluded as follows: “… this is a time for unity. Not fragmentation. For the good of the Archdiocese – our National Church – do not let those who wish for weakness lessen our resolve to strengthen the Greek Orthodox Archdiocese of America. We have accomplished so, so much. Let us resolve to unite to continue the good work for the years ahead.”

Mr. Michael Psaros, Treasurer of the Archdiocesan Council, offered a detailed and comprehensive report about the findings to date and pledged that going forward there would be accountability and transparency.

Present at the meeting were Metropolitans Methodios of Boston, Alexios of Atlanta, Nicholas of Detroit, Savas of Pittsburgh, Gerasimos of San Francisco and Evangelos of New Jersey.

The Council, following the discussion on the finances, heard and deliberated on several presentations of reports from the departments, ministries and organizations of the Archdiocese. The Archdiocesan Council Committees had met the previous day and advanced the work of the Church. These reports included: Stewardship, Outreach and Evangelism, Archons, Administration, Development, Youth &Young Adult Ministries, Ionian Village, Communications, Ecumenical Office, Internet Technologies, Internet Ministries and Center for Family Care.”