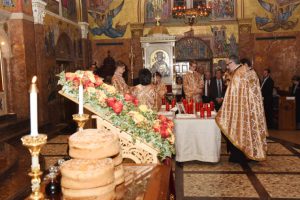 SIOUX CITY, IA – The Greek Orthodox Archdiocese of America appointed Fr. Luke Melackrinos to the Holy Trinity parish of Sioux City in Iowa. He will assume his full pastoral duties on November 19.

The parish belongs to the jurisdiction of the Metropolis of Chicago, which is currently vacant after the death of Metropolitan Iakovos. Metropolitan Nicholas of Detroit is the locum tenens and Bishop Demetrios of Mokissos is the chancellor.

Rev. Melackrinos was placed on suspension from all liturgical and administrative duties as presiding priest at St. Paul’s Cathedral in Hempstead, NY after The National Herald revealed in January that he was allegedly sending electronically images of his private parts to an adult female parishioner of his.He has a wife and three daughters.

The Archdiocese sent Melackrinos to a specialist psychotherapist and paid his fees.

Meanwhile, Archdiocesan Chancellor Bishop Andonios of Phasiane told TNH that Melackrinos had been working as a salesperson.

TNH has learned that Bishop Andonios reinstated Fr. Melackrinos and lifted his suspension based on the psychotherapist’s assessment and with the approval of His Eminence Archbishop Demetrios. Melackrinos was appointed to the distant Holy Trinity parish in Iowa, hoping that there will not be any reaction. Meanwhile, the Archdiocese issued a directive not to leak the information until Melackrinos officially assumes his duties. Andonios did not respond to TNH’s request for comment.

Metropolitan Nicholas told TNH that “Metropolitan Iakovos prior to his death had accepted the appointment of Fr. Melackrinos to the Holy Trinity parish. I didn’t appoint him; I simply honored the decision that had been taken by Metropolitan Iakovos as I do honor all his decisions. From now on things will be different with the new decisions.”

The Holy Trinity parish is comprised by 80 families and was established in 1918 by Greek immigrants.

TNH requested on October 22 to speak with Holy Trinity’s current priest, Fr. Demetrios Tobias, but a parish council member explained that Fr. Tobias is in Chicago. The same council member told TNH that Melackrinos will indeed assume his duties on November 19 and that the parish council president Costas Tsoibanos sent a letter to the parishioners confirming the same.

Melackrinos has already visited the parish. Sources from within the Archdiocese told TNH that Demetrios and Andonios are trying to keep the appointment a secret because they are afraid that other priests who have been suspended for serious misconducts and are under psychological/psychiatric care will also ask to be appointed in parishes and even at cathedrals.

Meanwhile, Andonios appointed Fr. Christopher Constantinidesto St. Paul parish. He was transferred from Holy Trinity in Dallas, TX, and is the sonof Fr. Evagoras Constantinides, Director of the Ionian Village in Greece.