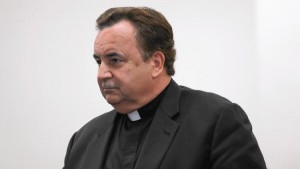 If you stole $100,000 from a church, a reasonable person would expect that you’d get some jail time for your crimes.

If a poor kid was charged with stealing a fraction of that much cash from a sandwich shop, chances are that jail would be waiting.

But a Wisconsin priest stealing from a church trust, a priest with a fondness for luxury goods and fine restaurants, a priest with a powerful ally in the Chicago Greek Orthodox church hierarchy?

Well, that’s a different story, because that’s no poor kid. That’s a holy man with the robes to prove it.

And in this one, the priest walks and doesn’t serve a day in jail.

It is the case of the Rev. James Dokos, the Greek Orthodox priest who pleaded guilty this week in Milwaukee County Circuit Court to a felony for embezzling more than $100,000 from the Annunciation Greek Orthodox Church in Milwaukee.

He paid the money back as restitution, and if he behaves himself and spends 40 hours doing community service, it’ll all be dropped down to a misdemeanor, authorities said.

But there’s more to it than that, because the Dokos saga leaves two great Greek Orthodox parishes ripped apart, Annunciation in Milwaukee, and Sts. Peter and Paul in Glenview.

Church leaders have been criticized for how the mess was handled. The Greek Orthodox Metropolis of Chicago, which oversees some 60 parishes throughout the Midwest and hundreds of thousands of church members, was scandalized.

Many laity in the Metropolis believe that spiritual violence was done, not only to these two churches, but to all of us. I believe it. I am Greek Orthodox.

I suppose that I could have left this one alone. But I’ve spent my career calling out corruption among the powerful, among politicians and their gangster helpers.

So for me to ignore what appears to be systemic corruption in my own church is impossible.

“In Chicago and here, people’s hearts are broken, and broken again because of this, just as we go into the Lenten season,” said Wendy Staves, a former parish council member at Annunciation. “It’s been spiritual violence, it’s the antithesis of what we want in church, and so though I love my faith, but I don’t go to church anymore. I can’t. Not after what happened.”

She stopped talking and over the phone I could hear her weep.

Dokos was put in charge of a seven-figure trust fund to benefit the Annunciation church. Most of the money was given to the church. But more than $100,000 was diverted by Dokos, for restaurant tabs and jewelry for his wife, other fine gifts and credit card bills.

According to a Tribune investigation, Dokos also gave a key ally, Bishop Demetrios of Mokissos, the No. 2 official in the Metropolis, more than $6,000 in checks.

A spokesman for the bishop told Tribune reporters it was traditional “honoraria.” He said the source of the money was not questioned.

With Dokos being investigated by the law, the bishop transferred him to Sts. Peter and Paul. And the beloved pastor there, the Rev Angelo Artemas, was removed, and sent to the Milwaukee church.

Both parish councils were upset. Demetrios scolded them, asserted his authority, and ousted the president of the parish council in Glenview.

He told the Milwaukee church that an investigation showed Dokos did nothing wrong. The Milwaukee parish council refused to believe it, and Demetrios apparently held Artemas responsible. Things became so heated that a Milwaukee prosecutor warned Demetrios against possible witness tampering and intimidation. Artemas is now at a church in North Carolina.

Jim Gottreich is the former president of the Sts. Peter and Paul parish council, the one who was removed by the Bishop.

“You know the Greek expression, the fish rots from the head? Well that’s what’s going on here,” Gottreich told me. “And the churches know it, and the parishioners know it, and that’s why donations are down all over the Metropolis. There are so many questions, including, where did Dokos get the $100,000? (for restitution)”

Gottreich was on vacation when we spoke.

“You know how the bishop plays things,” said Gottreich. “I expect when I get home that I’ll find a letter throwing me off the parish council for some cooked-up reason. But I won’t let him push me out of my own church. I’ve been here for 50 years. I’m not leaving.”

But not all stayed.

Stacy Sennott, a member of Sts. Peter and Paul, says she left the Greek Orthodox church because of Demetrios. She and many others think that Ecumenical Patriarch Bartholomew in Istanbul, leader of the Orthodox church, has ignored the scandal.

“This Dokos business has been a slap in the face to the faithful,” Sennott said. “He should be in jail. I’m Orthodox, and attend an Orthodox church, but I couldn’t stay in Greek Orthodoxy, not after what Demetrios did, kicking out Jim Gottreich, getting rid of Father Artemas, protecting Dokos and not a word from the Patriarch.”

“I don’t think he cares about us here in Chicago,” she said.

I repeatedly called the public relations man hired by the Metropolis to ask for comment. There was no response. Perhaps the hierarchs were reflecting on last Sunday’s service, which included my favorite Bible story, The Publican and the Pharisee. Do you know it?

In the temple, the wealthy Pharisee counted all his virtues and good works with great pride. And there was the lowly tax collector, the publican, his head down, begging forgiveness, saying only “Kyrie Eleison, Lord, have mercy upon me, a sinner.”

Then on Monday Dokos copped his plea and walked.

And in Milwaukee, and Chicago, it looks like the Pharisees won.

Listen to John Kass on “The Chicago Way” podcast here:www.wgnplus.com/category/thechicagoway.