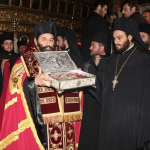 Metropolitan John of Lagada and Exarch of Central Macedonia has called 2011 “the year of Saint Kyranna”, which was inaugurated on the feast of the Saint on 8 January 2011. The center of the festivities has been in the village of Ossa, near Thessaloniki, where the Saint lived and where a magnificent Greek Orthodox church exists in her honor. To read about the life and martyrdom of Saint Kyranna, see

Following the heroic and martyric death of the young Saint Kyranna on 28 February 1751, the faithful took her precious relics and had her buried outside the city of Thessaloniki. At the same time portions of her clothes were cut into pieces and given to the faithful as relics for a blessing. The people of the village of Ossa had a church built in the village in her honor a few decades after this event and Christoforos Prodromitis had a Service of Praise written to be chanted on the annual commemoration of her martyrdom. Her life was recorded by St. Nikodemos the Hagiorite in his New Martyrology.

Because St. Kyranna was martyred during the time of Turkish occupation, the only thing that was known about the location of her relics was that they were buried “outside the walls” of Thessaloniki. 260 years later St. Kyranna allowed the location of her relics to be discovered to the people who have honored her memory all this time. This all began when Metropolitan John of Lagada inaugurated 2011 as the year of Saint Kyranna, and he began to research her life in various sources. Thus on 12 September 2011, with the help of a monk from Mount Athos and the assistance of specialists and forensic experts, they confirmed that in the Holy Altar of the Church of the Archangels in Ossa, where St. Kyranna herself attended the Divine Liturgy, beneath the floor slabs a large portion of her relics were discovered.

Any questions generated by the investigation of the remains of the Saint were quickly put aside when a beautiful fragrance filled the church when the relics of the Saint were uncovered. With her bones there were also the leather shoes of the Saint, and forensic experts were able to determine the height, sex, age and year of burial of the Saint. Following this great discovery, Metropolitan John notified Ecumenical Patriarch Bartholomew and Archbishop Ieronymos of Athens and All Greece, then proceeded to have the public informed through a formal statement.

On Friday 23 September 2011 in an atmosphere of emotion and piety, the faithful of Ossa and the surrounding area gathered in the Church of the Archangels to celebrate the first all-night vigil with the presence of the relics of their patron saint. Metropolitan John was the officiant together with Bishop Demetrios of Thermes and a large number of priests from the Metropolis. The celebration will continue until October 10th with daily Supplication Services and all-night vigils, and will culminate on October 11th when Ecumenical Patriarch Bartholomew will visit the village and venerate the relics of St. Kyranna. At that time also the relics of St. Kyranna will be translated from the Church of the Archangels to the newer church dedicated to her honorable memory.