Historic Event Offers Prayers on Behalf of Country, and Christians in the Middle East 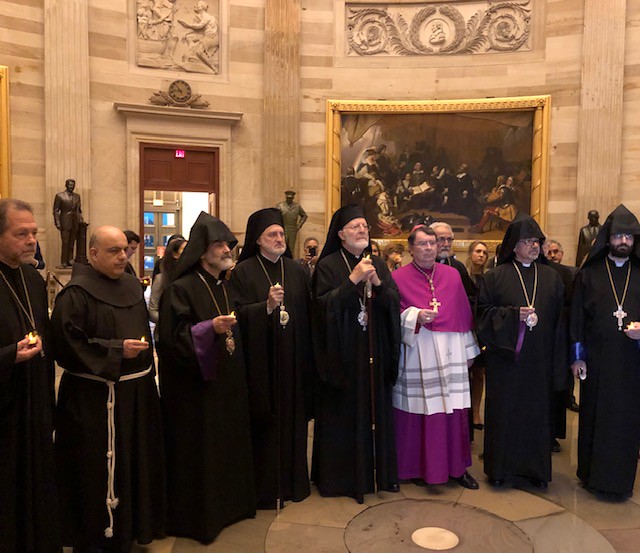 Washington, D.C. July 26, 2019 – On Monday, July 15, His Eminence Metropolitan Joseph led a prayer service in the United States Capitol, the first time that Antiochian Orthodox Christian prayers have been offered in the building which serves as the home for the U.S. House of Representatives and Senate.

The event, titled “The Early Christian Church: An Ecumenical Prayer Service in the Languages of the Middle East,” was hosted by the In Defense of Christians Religious Advisory Board, of which His Eminence is a member.

His Eminence was joined by religious leaders who are based in the U.S. and represent various Middle Eastern churches including: His Eminence Archbishop Elpidophoros of the Greek Orthodox Archdiocese of America;​ His Eminence Archbishop Anoushavan Tanielian and His Eminence Moushegh Mardirossian of the Armenian Apostolic Church of America; His Excellency Archbishop Christophe Pierre, Papal Nuncio to the United States; His Excellency Elias Zaidan, Bishop of the Maronite Catholic Eparchy of Our Lady of Lebanon of Los Angeles; His Excellency Gregory Mansour, Bishop of the Maronite Catholic Eparchy of Saint Maron of Brooklyn; His Grace Mar Abris Youkhanna, Bishop of the Assyrian Church of the East, Diocese of Erbil; and Rev. Ramzi Sidawi, OFM-Economo Custodiale, Franciscan Custody of the Holy Land.

The event began with a reception and remarks from dignitaries and members of Congress, including Representative Anna Eshoo (D-CA). Congresswoman Eshoo is of Assyrian and Armenian heritage, and she has passed legislation extending protection to persecuted Christians of the Middle East.

The prayer service began, led by His Eminence Metropolitan Joseph, and various prayers and chants were offered by the attending prelates in English, as well as Arabic, Armenian, and Aramaic. (View a YouTube video of the chanting of “Champion Leader,” and a video of His Eminence’s opening prayer.​)

Of the service, Metropolitan Joseph remarked, “We recite prayers for the country in our Divine Liturgy every Sunday, but it was a special blessing to be able to offer prayers for the President, the Congress, the Judiciary, and civil authorities, as well as all Americans, in the U.S. Capitol, which is the seat of our democracy.” He concluded, “We also thank God for the opportunity to pray together with our brothers and sisters in Christ for Christians in Syria, Iraq, and other countries in the East who have endured torture, captivity, persecution, and in many cases, death, for their faith.”