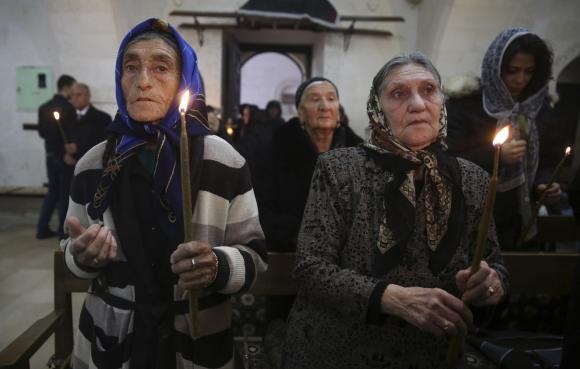 Syriac Christians from Turkey and Syria attend a mass at the Mort Shmuni Syriac Orthodox Church in the town of Midyat, in Mardin province of southeast Turkey in this February 2, 2014 file photo.

Out of fear of losing their lives or religion, a tiny group of Christians who still remain in the northern Syrian city of Rakka have agreed to pay off Islamists with a “Tribute Tax” so they won’t be killed.

Earlier this year, Rakka’s Christian leaders and representatives from Islamic State in Iraq and the Levant (ISIS), an Islamist branch of Al-Qaeda, signed a dhimma or protection agreement, under which members of the church must now pay for their own physical protection, reported Haaretz, an Israeli newspaper.

Under the dhimma, wealthy Christians must pay the ISIS $500 twice a year per person or four gold dinars. Middle class and poor Christians will pay half and a quarter of the fine respectively, “on condition they do not conceal their true financial situation.”

Christians may not rebuild vandalized or destroyed churches (many of which have been attacked in the past year) and are forbidden from building any new houses of worship. They also are banned from carrying weapons and “from engaging in commerce involving pork with Muslims.”

The rules also attempt to ensure that Christians will look after the interests of Islamists, as they are forbidden from aiding or assisting ISIS enemies and must report plots against the Islamist state.

They must also allow members of their own community to convert to Islam without objection.

Should Christians violate the dhimma’s rules, their life and property protections will be revoked.

Syria has been locked in a deadly war since 2011 with various rebel factions looking to bring down the government of Bashar al-Assad, a conflict which has left over 100,000 people dead and forced over 2 million to flee as refugees. The country’s minority Christian community, making up 10 percent of 23 million population, has been targeted by extremists, left with little protection from the government.

In March 2013, Islamists from the al-Qaeda affiliated Al-Nusra group took over the city from government loyalists and instated Sharia law. In May, the ISIS took control of Rakka through a series of bloody executions of those suspected of supporting President Bashar al-Assad’s regime.

The ISIS also took over the Armenian Catholic Church of the Martyrs, and transformed it into their headquarters. Prior to the Islamist takeover, the city’s population was estimated to be around 220,000, nearly 10 percent of that Christian. Despite the fact that many of the city’s Christians joined anti-Assad attacks, their lives have been threatened, institutions attacked, and the majority of the Christian population has fled the area.

Syrian activist Youssef told Al-Akhbar last fall that many Muslims felt they were helpless in protecting the area’s Christians.

“It was a tough situation. We could not defend our brethren with whom we have been living for years. We were deeply hurt and felt helpless and ashamed. Christians have been part of our history for decades. They lived among us and we could do nothing more than weep as we saw the flames and columns of smoke rising,” he said.

A BBC story from 2013 suggested that Rakka was the “largest city in the world to ever be controlled by al-Qaeda.”

Syrian president elections will be held in July.