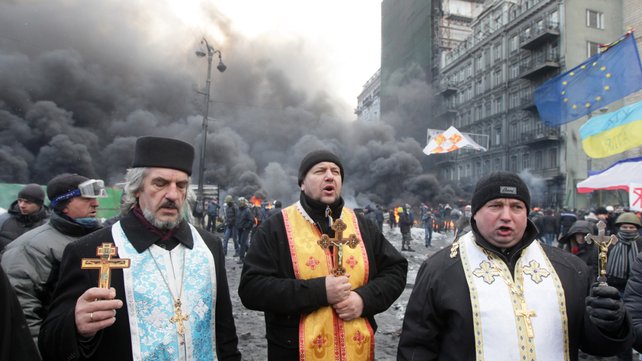 SYOSSET, NY [OCA] – His Beatitude, Metropolitan Tikhon, has asked that prayers for peace and justice in Ukraine continue.

Parishes, monasteries, and seminaries are requested to include the following petition in the Litany of Fervent Supplication:  “Again we pray that the people of Ukraine and Russia be granted the wisdom, mutual respect and love which will protect them from violence and preserve them in peace.”

By way of background, recent events in Ukraine have catalyzed a major crisis.  The United States, the European Union and NATO are involved in reactions to the events in Crimea.  The United Nations and the Organization for Security and Cooperation in Europe, both of which have the Russian Federation as a member state, are engaged in efforts at mediation.

Meanwhile, Ukraine has just emerged from months of confrontation, civil disobedience, and violence, especially in Kyiv.  The President of Ukraine has fled from the country to Russia, and a new government has been formed by the Rada, the Ukrainian Parliament.  Presidential elections are planned for May.

The Ukrainian Orthodox Church of the Moscow Patriarchate, together with other Christian churches and religious communities, has raised its voice against violence and for the integrity and unity of Ukraine.  The Locum Tenens of the UOC, His Eminence, Metropolitan Onufry, has appealed to His Holiness, Patriarch Kirill of Moscow, to raise his voice against Russian Federation military incursion into Ukraine.