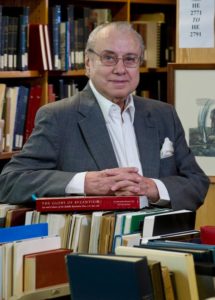 Our Greek Orthodox bishops who stumbled through incident after incident in their handling of sex abuse occurrences should come together, and along with the newly installed AB Elpidophoros, strengthen the sex protocol already previously established.

Would they dare not to invite strong-voiced faithful, women and men, to such a meeting? Would not the meeting and the resulting document be immeasurably improved?  This thought is highly unlikely to be considered, as it would be affront to the “God”-given power of the Bishops.

Orthodox Christian women are orphans. They have no allies. Oh sure, there is the successful Philoptochos and yes, many “Topica Somatia” have women auxiliaries; but this is not the same as having a strong spiritual voice as their much earlier sisters had.

Most Orthodox women are long over being cast with Bishop’s and Patriarchal   portrayals as feminine intellectuals, or worse, cherries atop a cake, or  various   interpretations of Mary that signal some mysterious vaginal docility while ignoring   the unpleasant reality of a mother having to deal with children, job, family or with a son as a priest who ends up on the wrong side of civil, and religious law.

There is a sense of inevitability to the point, when during the chants and the spiritual readings, that a woman, one or more, will grab attention by shouting out the disparity and the diminutive status they endure. In fact, I imagine she would rather have lived in the early days of the faith — seeing, speaking, and touching Christ without the pleasures of dishwashers, tv, and computers, when they had enjoyed, learned and earned so much more of an early-on prominent place in the Church.

If not for women, their devotion, determination, allegiance, mentoring and teaching our Orthodox faith, the   church would not have survived till this day.

Yes! Let  the women in! Visit  any church, anywhere, on any Sunday. No need for a scientific survey.

You men, the ones with the jeweled crowns and the ones with the upside-down top hats who have occupied your positions in male exclusiveness amidst your errors and sins in the spiritual management of the church, haven’t heard the last of it.

You Clergy have the audacity to call it protecting the church and its dogma; in reality, it’s called kicking the can down the road to your successors.

The real reason has nothing to do with human nature, or ontological reasons or any tradition that make sense. It has to do with biological arrangement. But if you want to be honest, it really is sexism! Our church’s idea of sexism is no more persuasive than any other for being enclosed in a male-created theology that quivers atop an explanation that largely ignores the women, who were the first to the empty tomb, the very first to report the resurrection news; and Jesus’, unusual in those  times, dependence on women throughout His ministry. The continued resistance by the church’s male domination toward women makes less sense with each passing year.

As the peoples of the world grow in knowledge and intellect, they have begun to acknowledge the position and value of women, and how mistaken their cultures and theology have been.

If this view of today’s women is not convincing enough, perhaps the scandals and mistakes of an all-male clerical culture will force a change.

May the Lord Jesus show us the way.

Mr. Nicholas Karakas, a prominent businessman and philanthropist, is well-respected for his many contributions to the Greek American community and for his benevolent philanthropic pursuits, and has received numerous commendations for accomplishments in business, education, community service.

He is also cofounder of the Karakas Family Foundation, an organization which awards scholarship grants to needy college students. Currently, by the twenty-first year of its existence, the Foundation has awarded over 350 scholarship grants to young students and for the last twelve years has donated money to winners of the national St. John Chrysostom Oratorical Festival sponsored by the Greek Orthodox Church. Mr. Karakas also served as President of the Orthodox Christian Laity and is responsible for the establishment of the Mathew-Dickey Endowment Fund, an organization dedicated to the service of 40,000 children in inner-city St. Louis. Finally, he is one of the founders of the Hellenic Spirit Foundation, comprised of a benevolent group of Greek Americans who organize various social events ranging from community service to musical performances and educational programs.