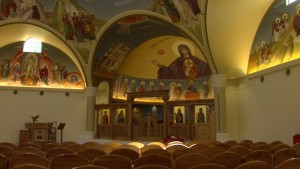 St. George Orthodox Church in Fishers says they would welcome the refugees.

FISHERS, Ind. – The anguish continues with Syrian refugees in Hungary as they search for safety in the European Union.

Many of the refugees are trying to get to Austria or Germany, but countless men, women and children have already died along the way.

Members of a central Indiana church say if those refugees can get to Indianapolis, they’d welcome them with open arms. Saint George Orthodox Christian Church in Fishers is ready to help the Syrian refugees.

President Obama announced last week the United States will take in up to 10,000 refugees next year.

“If we let them in, we have to really see them as fellow human beings who are suffering, imagine them as neighbors,” said Father Nabil Hanna, the pastor at Saint George Orthodox Christian Church.

That might not be as easy as it sounds, though, with security concerns about the refugee process serving as a backdoor for ISIS sympathizers.

“We don’t want to do anything stupid, but there’s always some level of risk and we hope that’s minimized,” said Hanna.

The State Department has said the U.S. response would have to be balanced against a careful screening process.

“They should be careful because of a lot of people, they can’t tell the difference or they can make a story of being a refugee. This is a very hard issue,” said Alfan Abdulahad.

Abdulahad, now a United States citizen, was once a refugee herself from Iraq. She, her husband, and two sons are Iraqi-born Christians who came to Indianapolis seven years ago.

Had they not made the decision to leave, they likely would have faced death at the hands of ISIS for their Christian faith.

“To be a refugee is not easy. You are going to leave everything. Your memory, your people, your neighborhood, friends, your everything,” said Alfan.

Once a pharmacist, the 57-year-old wife and mother of two now works as an office manager.

“It’s not easy for people who come with the skills, with the higher education, to start again,” she explained.

But as hard as it was for Alfan and her family to start over, it’s nothing she says, to the images she sees of millions of Syrian refugees on television.

Millions from Syria, caught in what some are calling the most dire refugee crisis since World War II.

An image of a soldier holding the body of of a three-year-old Syrian boy who drowned while trying to escape his war torn country went viral and caught the world’s attention.

“A picture’s worth a thousand words. Yes, thankfully, people are now attune to the dire need,” said Hanna.

A need and desire to help, says Alfan Abdulahad, that should be balanced against concerns for security here.

“We should be careful of course. We are not going to stop helping people who are coming as a real refugees,” she said.

But the problem, she said, how can you really tell?

“They should be careful, ” she explained of the refugee screening process. “This is a very hard issue.”

EXTRA: How you can help the Syrian refugees