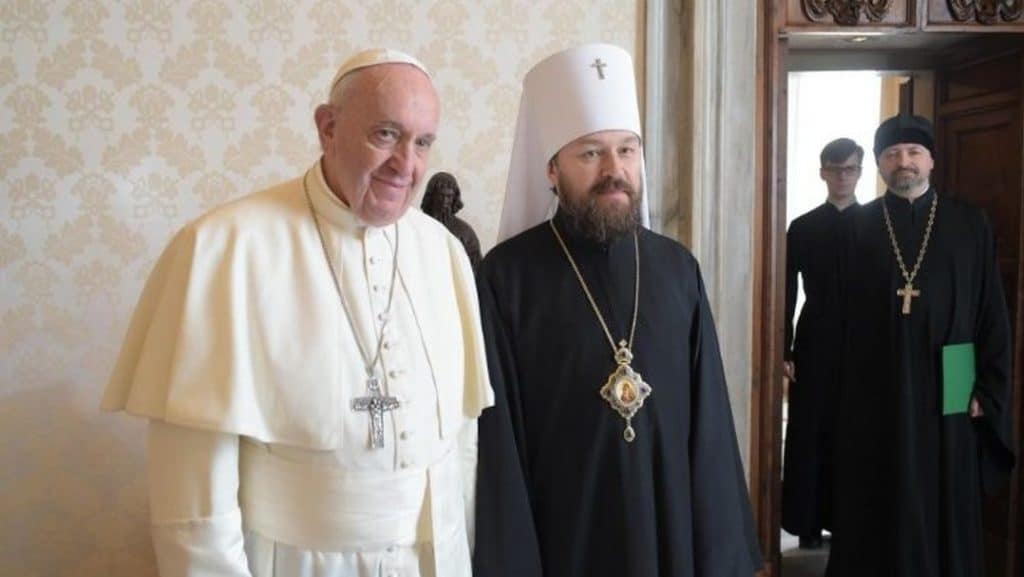 In an interview with Vatican News, Metropolitan Hilarion of Volokolamsk reflects on the importance of joint efforts geared towards the protection of our common home and the need for interreligious dialogue on the path to a world of fraternity.

Pope Francis, along with scientists and religious leaders, met in the Vatican on Monday for a meeting themed: “Faith and Science: Toward COP26” as preparations for the UN Climate Change Conference scheduled to hold from 1 – 12 November in Glasgow, Scotland, continue.

The Holy Father and the participants at the day-long encounter also signed a joint appeal that called on world leaders to take action for the protection of our common home and to work towards achieving net-zero carbon emissions as soon as possible.

We have only one home

Among the religious leaders present at the meeting was Metropolitan Hilarion of Volokolamsk, head of the Department for External Relations of the Patriarchate of Moscow, who spoke to Vatican News’ Fr. Benedict Mayaki, SJ on the importance of cooperation between religions in continued efforts for the protection of the earth.

The Metropolitan highlighted the shared responsibility that we all have to jointly work for our global home in the face of the ecological situation, regardless of religion or other differences.

“We have only one home and it is our global home. We cannot divide it into sections; we cannot say that this section will be exclusively for Christians or the other one exclusively for Muslims, yet another one for Jews. We have this global home and we are all responsible for its protection,” he said.

Metropolitan Hilarion then reiterated calls to political leaders to “take responsibility for the future of our planet” as the decision-making power is in their hands. He urged them to work to “make our planet clean, stop pollution, and prevent forthcoming catastrophes” linked to the climate emergency.

Listen to our interview with Metropolitan Hilarion

Reflecting on Pope Francis’ repeated calls for fraternity and a world where everyone lives in solidarity, the Metropolitan underlined that we are all one family: “the family of human beings created after the image of God.”

“As we have one home, we also constitute one family,” he said, adding that even though people may come from different races, ethnic origins or social status, we are all created in the image of God.

In this regard, he highlighted that the Russian Orthodox Church places a strong emphasis on interreligious dialogue, particularly through the work of the Interreligious Council of Russia. He further explained that the Council is headed by the Patriarch Kirill of Moscow and includes the participation of the leaders of the other religious confessions of the Russian Federation: Judaism, Buddhism and Islam.

He added that the Interreligious Council of Russia discusses common issues and comes to common positions that are presented to political authorities.

“We promote interreligious dialogue, and we believe that every Christian church takes responsibility for promoting it,” he said.

The experience of prayer unites Christians

On Wednesday, Metropolitan Hilarion presented Pope Francis with a copy of the Russian edition of the book “Prayer: The Breath of New Life” written by the Holy Father with a preface by Patriarch Kirill of Moscow and All Russia. The book collects the Pope’s words on prayer and in particular, his catechesis on the “Our Father.”

Responding to a question about this gesture, the Metropolitan noted that “the experience of prayer is something which unites all Christians.” He said the Pope’s words are also of value to Russian-speaking Catholics, adding that some Russian Orthodox readers may also profit from his lessons.

“I think it is important that Russian readers should know that Pope Francis is not only a church leader, he is not only involved in the administration of the Roman Catholic Church, but that he is also a man of prayer,” Metropolitan Hilarion said.