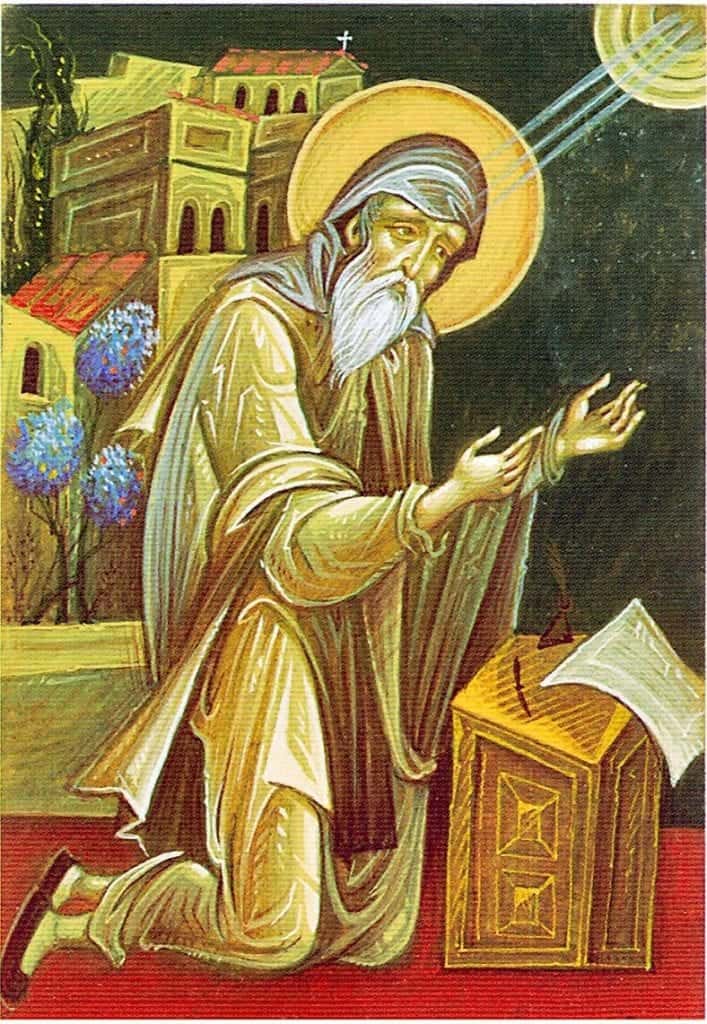 Saint Simeon the New Theologian was born in the year 949 in the city of Galatea (Paphlagonia), and he was educated at Constantinople. His father prepared him for a career at court, and for a certain while the youth occupied a high position at the imperial court. When he was fourteen, he met the renowned Elder Simeon the Pious at the Studion Monastery, who would be a major influence in his spiritual development. He remained in the world for several years preparing himself for the monastic life under the Elder’s guidance, and finally entered the monastery at the age of twenty-seven.

Saint Simeon the Pious recommended to the young man the writings of Saint Mark the Ascetic (March 5) and other spiritual writers. He read these books attentively and tried to put into practice what he read. Three points made by Saint Mark in his work “On the Spiritual Law” (see Vol. I of the English Philokalia) particularly impressed him. First, you should listen to your conscience and do what it tells you if you wish your soul to be healed (Philokalia, p. 115). Second, only by fulfilling the commandments can one obtain the activity of the Holy Spirit. Thirdly, one who prays only with the body and without spiritual knowledge is like the blind man who cried out, “Son of David, have mercy upon me” (Luke 18:38) (Philokalia, p. 111). When the blind man received his sight, however, he called Christ the Son of God (John 9:38).

Saint Simeon was wounded with a love for spiritual beauty, and tried to acquire it. In addition to the Rule given him by his Elder, his conscience told him to add a few more Psalms and prostrations, and to repeat constantly, “Lord Jesus Christ, have mercy upon me.” Naturally, he heeded his conscience.

During the day, he cared for the needs of people living in the palace of Patricius. At night, his prayers grew longer and he remained praying until midnight. Once, as he was praying in this way, a most brilliant divine radiance descended upon him and filled the room. He saw nothing but light all around him, and he was not even aware of the ground beneath his feet.

It seemed to him that he himself became light. Then his mind rose upward to the heavens, and he saw a second light brighter than the light which surrounded him. Then, on the edge of this second light, he seemed to see Saint Simeon the Pious, who had given him Saint Mark the Ascetic to read.

Seven years after this vision, Saint Simeon entered the monastery. There he increased his fasting and vigilance, and learned to renounce his own will.

The Enemy of our salvation stirred up the brethren of the monastery against Saint Simeon, who was indifferent to the praises or reproaches of others. Because of the increased discontent in the monastery, Saint Simeon was sent to the Monastery of Saint Mamas in Constantinople.

Around the year 980, Saint Simeon was made igumen of the monastery of Saint Mamas and continued in this office for twenty-five years. He repaired and restored the monastery, which had suffered from neglect, and also brought order to the life of the monks.

The strict monastic discipline, for which Saint Simeon strove, led to great dissatisfaction among the brethren. Once, after Liturgy, some of the monks attacked him and nearly killed him. When the Patriarch of Constantinople expelled them from the monastery and wanted to hand them over to the civil authorities, Saint Simeon asked that they be treated with leniency and be permitted to live in the world.

About the year 1005, Saint Simeon resigned his position as igumen in favor of Arsenius, while he himself settled near the monastery in peace. There he composed his theological works, portions of which appear in the Philokalia.

The chief theme of his works is the hidden activity of spiritual perfection, and the struggle against the passions and sinful thoughts. He wrote instructions for monks: “Theological and Practical Chapters,” “A Treatise on the Three Methods of Prayer,” (in Vol. IV of the English Philokalia) and “A Treatise on Faith.” Moreover, Saint Simeon was an outstanding church poet. He also wrote “Hymns of Divine Love,” about seventy poems filled with profound prayerful meditations.

The sublime teachings of Saint Simeon about the mysteries of mental prayer and spiritual struggle have earned him the title “the New Theologian.” These teachings were not the invention of Saint Simeon, but they had merely been forgotten over time.

Some of these teachings seemed unacceptable and strange to his contemporaries. This led to conflict with Constantinople’s church authorities, and Saint Simeon was banished from the city. He withdrew across the Bosphorus and settled in the ancient monastery of Saint Makrina.

The saint peacefully fell asleep in the Lord in the year 1021. During his life he received the gift of working miracles. Numerous miracles also took place after his death; one of them was the miraculous discovery of his icon.

His Life was written by his cell-attendant and disciple, Saint Nicetas Stethatos.

Since March 12 falls during Great Lent, Saint Simeon’s Feast is transferred to October 12.