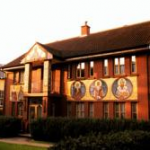 On Friday and Saturday, June 15-16, 2012, His Beatitude, Metropolitan Jonah will travel to Oxford, England to participate as a member of the society in the Annual General Meeting of the Friends of Mount Athos.

Under the presidency of His Eminence, Metropolitan Kallistos [Ware] of Diokleia, the Friends of Mount Athos is a charitable and education society dedicated to supporting the well-being of monasteries of Mount Athos and aiding those undertaking pilgrimages to the Holy Mountain.

Metropolitan Jonah will deliver a talk titled “Monasticism in an American Context.” Other presentations during the annual meeting will include “The Monk and the Maiden: Theophanes the Cretan and the Athonite Iconography of the Annunciation”, by Father Maximos of Simonopetra Monastery, and “Georgia on My Mind: An Illustrated Presentation on Monasteries in Georgia”, by Mr. Peter Lea.

During the weekend, with the blessing of His All Holiness, Ecumenical Patriarch Bartholomew of Constantinople, Metropolitan Jonah also will visit the well-known Patriarchal Stavropegial Monastery of St John the Baptist in Essex, England, founded in 1959 by Archimandrite Sophrony, the disciple of Saint Silouan the Athonite. Metropolitan Jonah will spend a few days in retreat at the monastery.