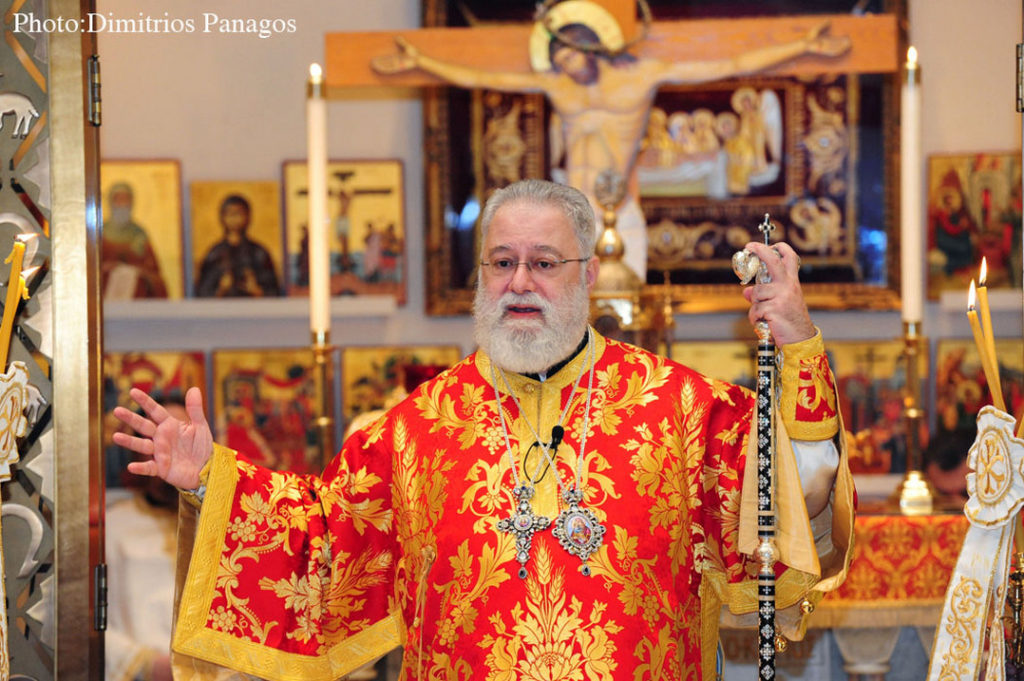 Metropolitan Savas of Pittsburgh, who warned his faithful about the release from prison of former Archimandrite Nicholas Hughes. GANP/Dimitrios Panagos

BOSTON – Metropolitan Savas of Pittsburgh, in a letter dated December 22, 2018 to the Clergy and Parish Council members of the Metropolis of Pittsburgh, warned about the release from prison of former priest Nicholas Hughes who in 2012 was arrested and has served six years in prison for pederasty.

In the meantime, the Ecumenical Patriarchate defrocked him and returned him to the ranks of the laity. Hughes was a celibate priest with the title of Archimandrite and served as Dean of the Annunciation Cathedral in Columbus Ohio.

Metropolitan Savas in his letter wrote among other things that, “six years ago, our Metropolis was shocked by the arrest of one of our priests. The now-former clergyman, the monk Nicholas (lay name: Patrick) Hughes, was caught by the police in an attempt to solicit two minors, and pled guilty to the charge of attempted rape. He was sentenced to prison by the State of Ohio in September 2012, and returned to the status of a layman by the Ecumenical Patriarchate on December 1 of the same year (which was communicated to the faithful both via the Metropolis office and the Archdiocesan newspaper, the Orthodox Obsever).”

He also wrote that “his (Hughes’) time of incarceration has ended, and he has begun his life again outside the prison. As Orthodox Christians, we remain committed to Christ’s vision of assisting those in prison and those who are in need, but we must also bear in mind our injunctions to protect the flock under our care, and to be respectful of the laws of our Nation and of the State of Ohio (in which he was incarcerated). Considering the nature of his offense, he is required to register as a sexual offender for the rest of his life.”

Savas urged the faithful to be aware about the archdiocese’s new regulations regarding such matters, writing, “I direct to everyone’s attention the recently adopted Policies for the Safety of Youth and Children, which includes provisions required by our Archdiocese for how registered sex offenders are to be handled if they ask to attend our parishes. These policies were adopted at our most recent Clergy-Laity Congress in Boston, and are binding on all our communities. The full text of the Policies is available at www.goarch.org/ safety.”

He also stated that “those who have the gifts to minister to those rehabilitating from serious crimes will assist Nicholas with his reintegration into the world. My fervent hope is that he find the road to repentance.”

As has been reported by the authorities and the media, Nicholas (Patrick) Hughes, who was 56 years old at the time of his imprisonment, was arrested by the Franklin County Sheriff’s Office on September 19, 2012 and charged with attempted rape and attempted unlawful sexual conduct with a minor. Police began investigating Hughes after they noticed he had posted an ad on an adult social networking site indicating that he was in search of sexual relations with children. An undercover detective responded to his disturbing ad. During the course of the sting operation, Hughes was under the impression that he was going to rendezvous with two young boys, ages 14 and 9, to engage in sexual activity. He was arrested as he arrived at the agreed upon location. Hughes had skipped his regularly scheduled Bible study class that he was leading so that he could sexually assault the two young boys, but he was arrested by the police. Hughes had also served at the Metropolis of Denver prior to his transfer in Ohio.