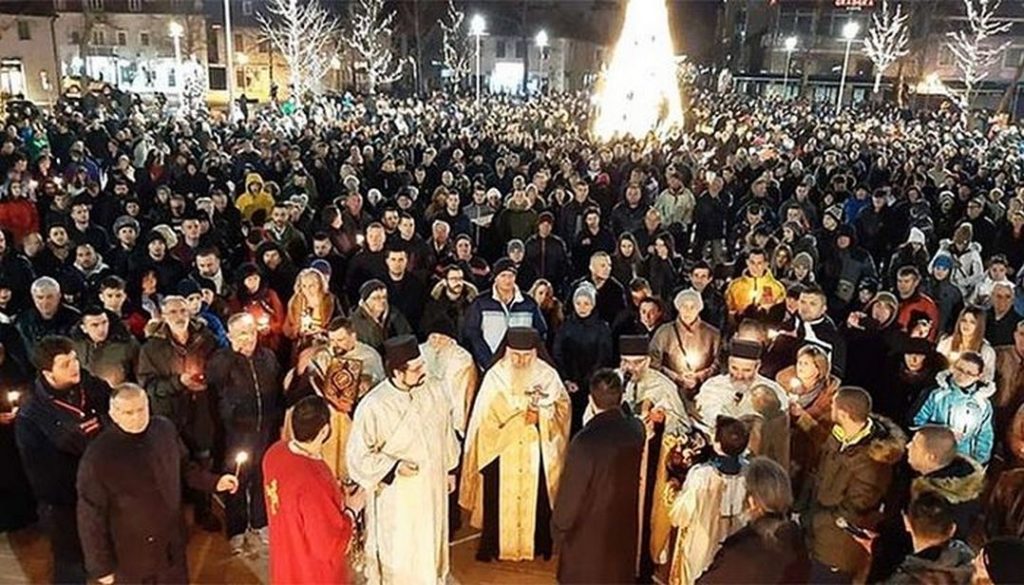 [Montenegro – January 3, 2020] Tensions continue to run high in Montenegro after the Parliament and President pushed through a law that the Serbian Orthodox Church views as a blatant attack, aimed at seizing Church property from the canonical Church in favor of the miniscule schismatic “Montenegrin Orthodox Church.”

The Episcopal Council of Montenegro, consisting of every hierarch of the Serbian Church serving in Montenegro, gathered on December 29, with the exception of His Grace Bishop Metodije of Diokleia, who was hospitalized after being beaten by police at a peaceful protest, for joint prayer and a meeting where it adopted a special statement in connection with recent events.

In particular, the Orthodox hierarchs stated that those politicians who oppose the Church and voted in favor of the scandalous law “excluded themselves from the Orthodox Church, and are therefore excommunicated from the Holy Mysteries.”

The bishops also stress that the passage of the law led to the jubilation of the neo-Montenegrin nationalists, most of whom are atheists, who hate the Orthodox Church.

In turn, Prime Minister Duško Marković issued a “final warning” to the clergy of the Montenegrin Metropolis of the Serbian Church in connection with the large-scale protests throughout the country.

“I advise the Metropolis of Montenegrin-Littoral not to incite discontent and unrest, and this is the last warning in this sense,” he said.

Despite the threats and persecution against them, the clergy and monastics of the Serbian Church serving in Montenegro gathered in Ulcinj several days ago to confirm their loyalty to the canonical Church and declare their readiness for a dialogue that respects the position of the Church.

Metropolitan Amfilohije of Montenegro reminded the clergy that the Church does not encourage demonstrations, especially violent ones, but “this does not mean that the faithful are not free to show resistance to lawlessness.”

The clergy also critiqued the Prime Minister’s claims that Met. Amfilohije is to blame for the violence in the country and his “warning” to the Church.

On New Year’s Eve, more than 10,000 faithful gathered on Freedom Square in Nikšić for a moleben in defense of the Serbian Orthodox Church.

“We came here to say: Don’t touch our holy sites!… They are not simple properties, they are sacred. Here dwells Christ, here dwells the Holy Spirit, Who holds us all and admonishes us. And if we want to be human, we must have a holy place. Let’s not spit on what is most sacred,” said Fr. Miodrag Todorovich.

His Eminence Metropolitan Hilarion (Kapral), the First Hierarch of the Russian Orthodox Church Outside of Russia, also issued a fraternal message of support to Met. Amfilohije, assuring him of the Church’s prayers for the Church in Montenegro.

The Episcopal Council of the Serbian Church in North, Central, and South America has also issued a communique regarding recent events in Montenegro, noting that such laws “are considered violations of human and religious rights given they do not conform to the standards of modern democratic states, and contradict the recommendations of the Venice Commission.”

The hierarchs note that they have addressed the U.S. Administration and the Government of Canada, highlighting the anti-democratic character of the new law in Montenegro, and they appeal to the authorities in Montenegro to release those who have been arrested for defending their sacred sites and to cease “terrorizing the Church, its clergy and faithful people.”

Meanwhile, more than 6,000 Serbian academic and cultural figures, clergy, and laymen have signed a petition “in defense of the Serbian Orthodox Church in Montenegro.”

Last night, tens of thousands of Orthodox faithful of Montenegro took to the streets in a number of cities for a moleben and cross procession to achieve the abolition of the scandalous new law.