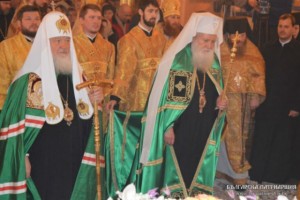 Bulgaria’s staunchly pro-Russian Patriarch has received an award in Moscow along with the Serbian President Tomislav Nikolic and the head of the Russian Duma Sergey Naryshkin.

The head of the Bulgarian Orthodox Church, Patriarch Neophyte, received the 2015 annual award of the International Foundation for the Unity of the Orthodox Peoples in Moscow on Wednesday.

The Patriarch was awarded for “his contribution to the unity of Orthodox peoples and the promotion of Christian moral values in society”, along with Serbian President Tomislav Nikolic and the president of the Russian Duma, Sergey Naryshkin.

While the prize is officially awarded to clerics, politicians and public figures who contributed to the development of the Orthodox Christian community, in practice the awards go to public figures seen as loyal friends of Russia.

“This prize was given to president Parvanov because of his pro-Russian attitudes,” Kalin Yanakiev, professor at Sofia’s St Kliment Ohridski University, told BIRN.

He noticed a political agenda in the latest awards as well.

“The Russian Orthodox Church is used as a weapon of the geopolitical ambitions of the Russian authoritarian regime,” Yanakiev argued.

The awards ceremony, in the Great Hall of the Christ the Saviour Cathedral in Moscow, took place during Neophyte’s five-day trip to Russia, made on the invitation of the Russian Patriarch, Kiril.

Since Neophyte was elected as Bulgarian Patriarch in 2013, he has met his Russian counterpart five times – a clear sign of the close relations between the two churches.

Аhead of the first Holy Great Council of the Orthodox Church in 1,200 years, which is scheduled to open in Crete in June, the Bulgarian Patriarchate has strongly backed the Russian Patriarch in his ongoing conflict with the Istanbul-based Ecumenical Patriarch, Bartholomew I.

Against historical tradition and the resistance of Bartholomew I, Russia’s Kiril has succeeded in imposing unanimity instead of a majority vote as a decision-making principle of the Council.

As well as taking the Russian side in this dispute, the Bulgarian Church has also decisively supported a Russian-backed archbishop as head of the Czech and Slovak Orthodox Church.

Last December, the Bulgarian Patriarch also demonstrated his loyalty to Moscow on another topic which is key for Russia – Ukraine, sending a letter to the Ukrainian President Petro Poroshenko, effectively defending Russian control of the Ukrainian Orthodox Church.

Ukraine’s Orthodox Church has split into two since Ukraine proclaimed independence in the 1990s, one side loyal to the Russian Patriarch and the other proclaiming its own ecclesiastical independence under a Ukrainian Patriarch.