[ditty_news_ticker id="27897"] Not Even The Greek Flag? - Orthodox Christian Laity 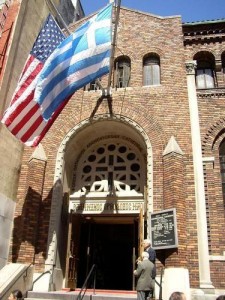 It might appear to be an innocent omission. It is not. Not only it is an important issue in itself, it reveals that the Church in America is on the wrong course.

The National Herald revealed last week in its Greek edition that the Archdiocesan Cathedral of the Holy Trinity in New York no longer displays the Greek flag.

The American flag and the flag of the Patriarchate fly above the main entrance, and we have no problem with that. “We have no money to buy a Greek flag,” said the Dean of the Cathedral to TNH.

One gains nothings by exclaiming, “Shame on you!” I do not believe that the Archbishop agrees with the change, or that he has even seen it. Others have walked through entrance and not noticed it. It is a matter the entire system of governance of the Church and in the community.

The question is not – as tempting as it is – how we got to this point, but what to do from here. Our Church continues – if I’m not mistaken- to be called the Greek Orthodox Archdiocese of America.

It is understood that it uses, to some extent, the basic elements of the Greek Orthodox identity, such as the language, its religious traditions, the flag etc. Are these merely picturesque and sentimental things? Do they discredit us in the eyes of others, isolate us, make us less American, open us to ridicule? Only those who are shortsighted and ignorant of history could make such arguments.

Rather, respect for our homeland and the place of our ecclesiastical origins strengthens our Church, and makes her even more respected. It is no small thing for our Church to have roots and references in the history of Hellenism and Orthodoxy and in the Ecumenical Patriarchate of Constantinople.

Otherwise what is it? Just one of those Churches springing up here and there every day from various charlatans who exploit innocent people? Or maybe we are a charming exception among minorities?

It bothers us, and rightly so, that third parties sometimes do not treat us with the respect we deserve. But why should this surprise us when we do not respect ourselves? When we do not appreciate the treasure of Hellenism and Orthodoxy that we have in our hands?

Is it really progress to cut ourselves off from our roots, to renounce our ancestors, the pioneer immigrants who built these churches? Are we not actually renouncing ourselves?

(Note: Since the printing -in Greek- of this note – the flag has been put back in its place.)