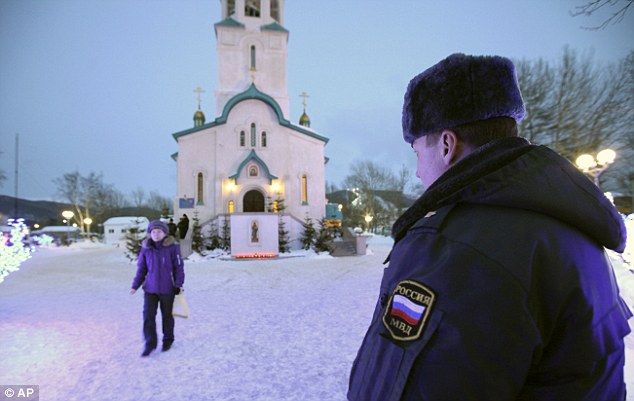 Shooting: A policeman watches as a churchgoer leaves the Russian Orthodox cathedral in Yuzhno-Sakhalinsk, where a gunman opened fire on Sunday

A man employed as a private security guard opened fire in a Russian Orthodox cathedral on the island of Sakhalin, killing a nun and a churchgoer and wounding six others.

The shooting occurred on Sunday at a time when Russian security forces are on high alert due to safety concerns about possible attacks on the Winter Olympics in Sochi, thousands of miles to the west.

Officials said there was no apparent link to the Games.

The gunman was detained at the Cathedral of the Resurrection of Christ in Yuzhno-Sakhalinsk, after the shooting, the federal Investigative Committee said.

It added that the suspect had worked as a security guard in Yuzhno-Sakhalinsk, which is some 4,130 miles from Moscow.

There was no immediate word on a motive in the attack, which comes just six days after a Moscow teenager killed a teacher and a policeman and held classmates hostage in the first major school shooting in Russia.

Most of the wounded in Sunday’s mid-afternoon attack were shot in the legs and their lives were not in danger, according to state news agency RIA Novosti, citing the regional leader of the Russian Orthodox Church, Archbishop Tikhon.

He said a prayer service for the victims would be held later on Sunday at the cathedral, which is the main Russian Orthodox church in a region that includes Sakhalin and the Kurile island chain.

The island is situated in the Sea of Okhotsk, north of Japan.

The part of the church where the shooting took place would have to be cleaned of victims’ blood and blessed, he added.

The Investigative Committee said psychiatrists would attempt to determine the suspect’s mental condition.

There have been a handful of shooting sprees in offices and public places in Russia in recent years, but they are relatively rare and state-run media tend to treat such attacks as a largely American phenomenon.

The Feb 3 shooting at a Moscow school, in which a student used his father’s rifles, has led to calls for stiffer punishment for gun owners whose weapons are used in attacks.