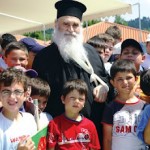 Nominated for the Nobel Peace Prize, among great personalities from around the world, is an Orthodox priest known as the “saint” of prisoners.

Father Gervasios from Thessaloniki has dedicated his life to offer assistance to needy prisoners.

People of the arts and many scientists from five continents have suggested the Archimandrite Gervasios Raptopoulos as a candidate for the Nobel Peace Prize by the Norwegian Academy.

The countdown to the awards has begun, as the announcement will take place on October 12 at 11:00 am.

Fr. Gervasios’ ministry for the release of indigent prisoners “Hosia Xeni” have made a huge contribution for 35 years.

They help to regain the freedom of people at the detention center for small offenses and cannot afford bail for their sentence.

But not only that.

“They offer the detainee clothing, footwear and cleanliness. Also financial assistance for basic needs, in dental and orthopedic care. Varied is the assistance to the families of prisoners. A monthly allowance of 300 euros is given to the children of those in prison abroad until they complete their university studies. They contribute to the cleaning of the mess and the heating of prisons of our country,” says “Democracy” of the ministry.