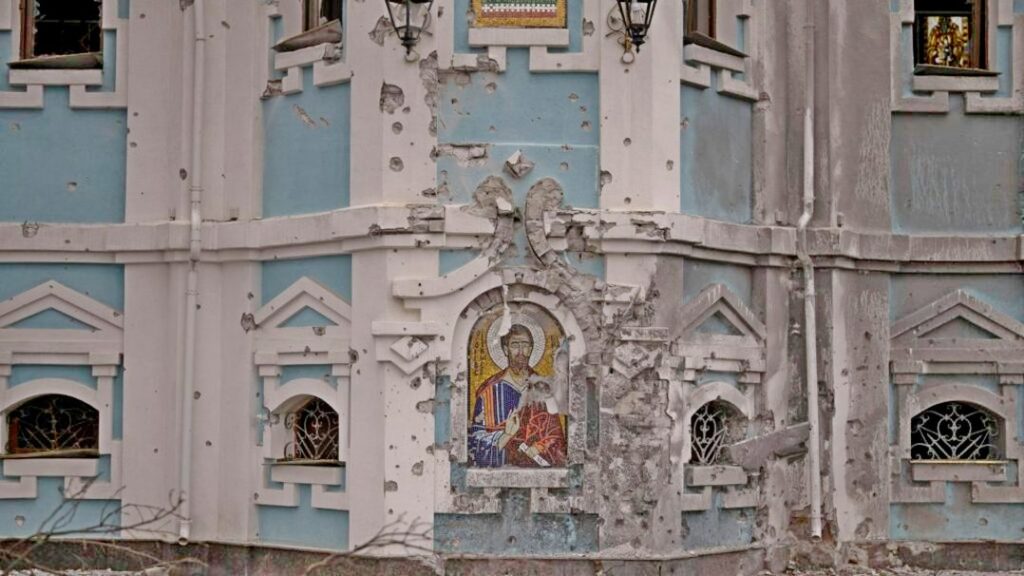 A church is damaged after a Russian attack in Kharkiv, Ukraine, Sunday, March 27, 2022. (AP Photo/Felipe Dana)

As the war in Ukraine rages on, a parallel war is underway within the Orthodox Church. Not much has been said about this religious conflict in the mainstream media, even though it is playing a crucial role in the military conflict. And it’s a problem affecting not merely Eastern Europe, but Australia too.

I have borrowed the title of this article, “Orthodox c’est fini” (French for “Orthodoxy is finished”), not from some militant atheist, but from a leading Greek Orthodox theologian, Professor Petros Vassiliadis [Prof. Vassiliadis made this remark in a March 11 post on his Facebook page.]. It was with these words that he responded to a recent sermon given by Patriarch Kirill, the head of the Russian Orthodox Church. The occasion was (ironically) the Sunday of Forgiveness, March 6, the last Sunday before Lent, and the location was the Cathedral of Christ the Saviour in Moscow. As terrified civilians in Ukraine were fleeing Russian bombs, in Moscow Patriarch Kirill gave what has now become an infamous sermon supporting President Putin’s invasion. And what was His Holiness’ justification for this ‘holy’ war? “The Gay Pride parade”! Ukraine has sold its soul to Western libertinism, he stated, as is shown by its endorsement of homosexuality. The fight, therefore, is not only against NATO, but against darker, diabolical powers: “We have entered into a struggle that has not a physical, but a metaphysical significance.”

The real aggressor, in Kirill’s view, is not Putin or the Russian people, but the decadent West, which has sought to divide Ukraine and Russia, even though the two “came from one Kievan baptismal font, are united by common faith, common saints and prayers, and share a common historical fate” (quoting this time from a letter he wrote to the Acting General Secretary of the World Council of Churches). And standing in the way of this irredentist dream of the ‘Russian World’ (Russkiy mir), where Ukraine is reunited with the motherland (as in the good old Soviet days), is none other than the very leader of the Orthodox Church, Patriarch Bartholomew of Constantinople, after the latter granted ‘autocephaly’ (independence) to the Ukrainian Orthodox Church in 2019.

Kirill is no doubt deranged, but he is now also dangerous – dangerous because he is backing his even more deranged dictator, who may soon begin using chemical weapons (having built up some experience in this in Salisbury and Syria). A small minority of Russian clergy has bravely turned against their leader, and much of the Orthodox communion worldwide (with the disgraceful exception of the churches of Serbia, Bulgaria, and Jerusalem) has condemned the invasion and Kirill’s part in it.

But what has gone largely unnoticed by Kirill’s critics, whether they be Orthodox or not, is the way in which the Orthodox Church, in both its theological thought and organisational structure, had enabled the Ukraine war. Kirill’s messianic exceptionalism, his vision of Russkiy mir, of Russia as called to save the world from itself, might well be a distortion of the ancient Orthodox faith as rooted in the biblical and patristic traditions. But Kirill’s way of thinking and its complicity with the propaganda and actions of the Russian state (not only now, but over many years) is not surprising given Orthodoxy’s strained relationship with the modern world.

In a variety of respects, from theology to politics, Orthodoxy has failed to meet the challenges of modernity, let alone postmodernity, and Kirill is only the latest and saddest manifestation of this. Orthodoxy is here in a similar predicament to Islam. In fact, in June 1999, during a session of the Joint Russian–Iranian Commission on Islam–Orthodoxy dialogue, held in Moscow, Kirill (then Metropolitan of Smolensk and Kaliningrad) and Muhammad Ali Tashkiri (Shia cleric and senior advisor to Ayatollah Ali Khamenei) expressed their unified stance against what they perceived as an attack from western liberal values. This siege mentality, which seeks to protect the purity of faith from contamination from the secular West, has become a common feature in the psychopathology not only of fundamentalist Islamic clerics in Iran but also of Orthodox bishops in Moscow and monks on Mt Athos.

Orthodoxy’s anti-modernism also finds expression in its ambivalence, if not hostility, towards democracy. Like theocratic Iran, Orthodoxy has developed a patriarchal and authoritarian power structure (a legacy from its Roman and Byzantine inheritance), where authority resides in the person of the bishop, with little room for lay participation in the decision-making process.

Orthodox scholars have countered that there is no in-principle incompatibility between Orthodoxy and democracy. It is often pointed out, for example, that Orthodoxy in the West (e.g., western Europe, North America, Australia) has a long experience with democratic systems and with living in a pluralistic social environment. This, it is further argued, can be seen as flowing from the church’s very nature and vocation. Despite its theocratic, Byzantine heritage, the Orthodox Church has developed a eucharistic and eschatological ecclesiology which is not only consistent with, but may well underpin, the values of democracy such as individual liberty, equality, inclusivity, and diversity. A view of this sort has been defended by Aristotle Papanikolaou [See Aristotle Papanikolaou, “Byzantium, Orthodoxy and Democracy,” Journal of American Academy of Religion 71 (2003): 75-98.], professor of theology at Fordham University, who states that the mission of the church is undertaken by means of eucharistic worship through faith and persuasion, not coercion or force: “The church’s mission is to call the world to the salvation offered in Jesus Christ not by Christianizing the state but through persuading others to freely join its eucharistic communion, that is, its communal praise, worship, and offering to God.” But if the church relates to the world in this manner, then in order to be consistent with itself the church must accept a (democratic) community distinct from its own that consists of religious, political and cultural diversity and a (democratic) state that affirms and protects such diversity. There are, therefore, resources within the church’s own theology and ecclesiology that would allow it to support democratic principles: “…the existence of a politically diverse community in which the church is one voice among others is not a betrayal of the church’s nature but, rather, the necessary result of the church as an eschatological community.”

But even if Orthodoxy can co-exist with a democratic state, what Papanikolaou overlooks is the vital question of whether Orthodoxy itself – its institutional structures and forms of governance – can be democratised. For even if the church relates to the world through democratic means (persuasion, not coercion), this does not necessarily mean that the church will also relate to itself (to its own members) in democratic fashion. And this is precisely the problem today: the Orthodox Church eschews democratic forms of (self-)governance. The laity, especially women and LGBTQ, continue to be marginalised, while diversity, doubt and dissent continue to be viewed as dangerous rather than as necessary elements of a flourishing, self-critical community. Is it any wonder, then, that Putin’s police-state, where protesters are arrested and detained every day and war coverage is heavily censored, would find its most faithful ally in the autocratic Russian Church?

And I say ‘Russian Church’, not ‘Russian Orthodox Church’, to emphasise another problematic feature of contemporary Orthodoxy: nationalism, bordering on racism. Both Kirill and Putin have taken full advantage of this. As have many in Greece, where Article 3 of the Constitution declares that “the predominant religion in Greece is the religion of the Eastern Orthodox Church of Christ,” where the “is” is not merely descriptive but has normative force. As Konstantinos Karamanlis, the former prime minister of Greece, once stated: “The nation and Orthodoxy have become in the Greek conscience virtually synonymous concepts, which together constitute our Helleno-Christian civilisation.” [Quoted by Kallistos Ware, “The Church: A Time for Transition,” in Richard Clogg (ed.), Greece in the 1980s (London: Macmillan, 1983), p.208.]

The Church pays dearly for its relationship to the nation by being locked into a defensive posture, by its adherence to the past and to social, cultural and ideological anachronism and conservatism, by the temptation to turn back the clock, by fundamentalism and anti-Europeanism – in a word, by its inability to participate in the modern world.

…We Orthodox (primarily in the traditionally ‘Orthodox’ countries) have become so identified with our individual national Churches and local traditions, we have combined Orthodoxy with our individual national narratives (the ‘Great Idea’, nationalism, etc.) to such a degree, and we have so interwoven the faith with customs, that we have largely lost awareness of catholicity and universality, and we have reduced Orthodoxy to the realm of custom, ancestral heritage, and ethno-cultural identity.

Putin and Kirill are already finished, whatever legitimacy they once had now entirely gone. Whether the Orthodox Church has a future will depend on whether it continues to follow their example. I am reminded in this context of The God That Failed, a postwar collection of reflections from “initiates” like Arthur Koestler and “worshippers from afar” like André Gide, who converted to Russian communism in the interwar years, only to be repelled by what they found upon closer contact with the Soviet regime. Gide, upon returning from Russia in 1936, wrote:

The Soviet Union has deceived our fondest hopes and shown us tragically in what treacherous quicksand an honest revolution can founder. The same old capitalist society has been re-established, a new and terrible despotism crushing and exploiting man, with all the abject and servile mentality of serfdom. Russia, like Demophon, has failed to become a God and she will never now arise from the fires of the Soviet ordeal.

Russian Christianity, another failed god, may well be finished too, at least in its current format. This fate, in my view, is to be celebrated as an opportunity for finding new ways of thinking about and living out religion, overcoming the violence of Orthodoxy, indeed overcoming the obnoxious appellation of ‘orthodoxy’ itself, with its exclusion of the other as heterodox or heretical.

As a step in this direction, I will counterpose Kirill’s sermon at Moscow’s Cathedral of Christ the Saviour with an equally notorious performance at the same cathedral, a decade earlier. This was when the feminist punks, Pussy Riot, entered the cathedral in their colourful balaclavas, prostrated themselves and made the sign of the cross, and then brazenly sang their “Punk Prayer”, kicking and punching the air amid flustered nuns and guards. If only more people in the country at the time paid closer attention to the meaning of this act of defiance rather than anxiously rushing to denounce it in the name of faith and social order, we might be in a different position today….