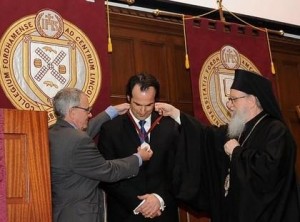 NEW YORK – It was an evening rich in expressions of both pride and humility. On November 18, in a simple but moving ceremony in Fordham University’s venerable Keating Hall, Professor Aristotle Papanikolaou was installed as the inaugural holder of the Archbishop Demetrios Chair in Orthodox Theology and Culture, the first university-endowed chair dedicated to Orthodox Christianity in North America.

The presence or Archbishop Demetrios of American, who offered closing remarks and the benediction, and the President of Fordham University, Rev. Joseph M. McShane, S.J. , reinforced by an auditorium filled with notables, students and faithful, testified to the historic significance of the occasion, which adds to the substance of the Orthodox Christian Studies Center (OCSC) as both a center of scholarship and the advancement of Orthodox-Catholic dialogue.

Roger A. Milici, Jr., a Fordham Vice President, invited Monsignor Joseph G. Quinn to offer the invocation and Fordham’s provost, Stephen Freedman, called it a very proud day in university history, celebrating the work of both Papanikolaou and Archbishop Demetrios, whose tenure as a hierarch is complemented by his academic achievements, which includes two doctorates and his time as a visiting professor at Harvard University.

John Harrington, the Dean of Arts and Sciences, outlined Papanikolaou’s career, which includes authoring or editing six books and co-founding with George Demacopoulos of the center.

McShane was the most jubilant, proud to honor “one of our own” – Papanicolaou is a Fordham alumni – and “one of my great heroes, His Eminence Archbishop Demetrios.”

There was also a warmth to the occasion not common to academic affairs. “Everyone has called you by your formal and rightful name, but Telly, you are always Telly,” he said. He then asked Papanikolaou’s mother Xanthippe (Cynthia) to rise. His father, Rev. Byron Stylianos Papanikolaou was unable to travel.

After rousing applause Papanikolaou began with expressions of appreciation, “but I want to start by first thanking my grandmother, Panagio Kassos.”

Although he correctly noted “hers was not an uncommon story,” for Greeks of her generation – she was born in 1906 – it was heroic nonetheless. Papanikolaou said she was proud of the 6th grade education that enabled her to read and write – not common among her peers, “and with all my degrees I will probably never consider myself smarter than she is … I am constantly striving to embody her wisdom…I owe anything that is good in my life to her commitment, courage, grit and most importantly, her faith.”

He also paid tribute to the great Orthodox scholar Fr. John Meyendorf. He recalled being told that he and Demacopoulos were hired “to continue the Orthodox presence that Fr. Meyendorf brought to Fordham ,and of course it took two of us to equal one Fr. John Meyendorf … a kind and generous man… great scholar and ecumenical figure, who paved the way to improved Orthodox-Catholic relations. “

“And I want to acknowledge a woman well known only to those only in the know,” he said. “Stella Moundas, who was assistant to the president of the University for decades…she was a remarkable woman who cared for the Orthodox students on campus and in her own way facilitated relations between Fordham and the Orthodox churches.”

Papanikolaou said to Archbishop Demetrios, “Your Eminence I had the privilege of being your student at Holy Cross and I remember you rushing after class to go to Harvard,” to teach. “I recall thinking to myself at the time that that’s exactly what the Orthodox tradition needs, a presence in the institution of higher learning… so in many ways you have been the inspiration for all of this and it is fitting that your legacy is being honored with the establishment of this chair.”

And when an idea is ready to take on flesh and bones, it needs institution support and material resources. He said to Dr. McShane, “none of this would have happened without your leadership…ours was an unprecedented and risky venture, and you bet on it.”

To Mary and Michael Jaharis he said “I cannot begin to express the deep admiration, respect, and, if I may add, affection I have for both of you. You believed in us at a moment when we really needed to be believed in.” The chair is the result of a $2 million gift from the Jaharis Family Foundation.

Citing Demacopoulos, he declared “It’s not bad when you get to work with one of your closest friends on a passion of mutual interest,” and he continued that “if tonight is some declaration of my worthiness to hold this chair, then let it also be declared that he is unequivocally as deserving of this chair as I am.”

Then he shared more evidence that the man and the mission are shaped by family experiences.

He said of his siblings, “Sultana and Evans have always kept me honest and they have made me a better person.” He swelled with the most pride, however, when referring to his sons “(Lord) Byron) and Alexander (the Great) and touched all with his declaration of love for his wife, Constantia Tolios, or Dena, “an accomplished lawyer in her own right…I love her truly, madly and very deeply…it’s an indescribable blessing to live every day of your life with your best friend. We’ve know each other since we were little…There is a picture of us when we were three and five.”

The love he has been blessed with has informed Papanikolaou’s thinking and writing about faith and life in an often painful world. The title of his lecture was Violence and Virtue, which illuminated the experience of war veterans. He spoke on how “the Eastern Orthodox thinking on virtue offers resources for illuminating and transfiguring the human experience of violence.”

He began with the Orthodox idea of Theosis as the goal of human life, which is translated as divinization but is often misunderstood – within and without Orthodoxy. Papanikolaou said it is not the acquisition of superman- or Zeus-like qualities, or an overpowering of man by God, but an assimilation to the divine that “takes the form of human learning to love … as God loves.”