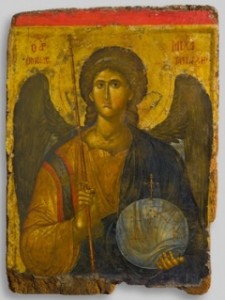 Art of Byzantium from Greek Collections Premieres at National Gallery of Art, Washington from October 6, 2013, through March 2, 2014; Travels to the J. Paul Getty Museum, April 9 through August 25, 2014

WASHINGTON, DC―In the first exhibition devoted to Byzantine art at the National Gallery of Art, Washington, some 170 rare and important works, drawn exclusively from Greek collections, will offer a fascinating glimpse of the soul and splendor of the mysterious Byzantine Empire. On view in the West Building from October 6, 2013, through March 2, 2014, Heaven and Earth: Art of Byzantium from Greek Collections will trace the development of Byzantine visual culture from the fourth to the 15th century, beginning with the ancient pagan world of the late Roman Empire and continuing to the opulent and deeply spiritual world of the new Christian Byzantine Empire.

Recognized masterpieces, many never lent before to the United States, will be on view with newly discovered and previously unpublished objects from recent archaeological excavations in Greece. Sculptures, icons, mosaics, frescoes, manuscripts, metalwork, jewelry, glass, embroideries, and ceramics are being loaned by the Benaki Museum, Byzantine and Christian Museum, National Archaeological Museum, and Numismatic Museum, all in Athens, and the Museum of Byzantine Culture in Thessaloniki, as well as from collections in Argos, Corinth, Crete, Kastoria, Mistra, Patmos, Rhodes, and Sparta, among others. After Washington, the exhibition travels to the J. Paul Getty Museum, Los Angeles, where it will be displayed at the Getty Villa from April 9 through August 25, 2014.

“We are delighted to present the Byzantine period to our visitors. The earliest paintings in our own collection from the 13th century would not have been possible without these Byzantine precedents,” said Earl A. Powell III, director, National Gallery of Art, Washington.

“This exhibition will present to the American public the most important legacy of Byzantium, a great civilization based on Hellenism and Christianity. The 13 Byzantine Museums of Greece are the only museums in the world dedicated to Byzantine history and culture, which are major constituents of our national heritage. Some of the greatest masterpieces of Byzantine and post-Byzantine art will be travelling to the United States in a few months to be included in the exhibition Heaven and Earth: Art of Byzantium from Greek Collections,” said Costas Tzavaras, Greek Minister of Culture.

The exhibition is organized by the Hellenic Ministry of Education and Religious Affairs, Culture, and Sports, Athens, with the collaboration of the Benaki Museum, Athens, in association with the National Gallery of Art, Washington, and the J. Paul Getty Museum, Los Angeles.

In 330 Emperor Constantine the Great moved the capital of the Roman Empire from Rome some thousand miles to the east, near the site of the ancient Greek city of Byzantium on the Bosphorus Strait linking the Aegean and Black Seas. Renamed Constantinople (now Istanbul), the city became the largest and wealthiest in the Christian world. The Byzantine Empire was the longest-lived political entity of Europe, lasting for more than a millennium before falling to the Ottoman Turks in 1453. At its height in the sixth century, the empire encompassed most of the lands surrounding the Mediterranean Sea; in the 10th century it comprised Greece, Asia Minor, and the Balkans. By the time it collapsed in 1453, the empire was a shadow of its former self, limited to Constantinople and parts of Greece. Although the empire expanded and contracted throughout its history, it remained famed for the splendor of its art and architecture, particularly that of Constantinople, which dazzled pilgrims, merchants, foreign dignitaries, and tourists from throughout the medieval world.

The exhibition will include approximately 170 works of art presented in five thematic sections:

From the Ancient to the Byzantine World will include works dating from the fourth to the sixth century, when Christianity and paganism coexisted, such as two marbles statues from the fourth century—Orpheus Playing the Lyre and The Good Shepherd. Although some Early Christians defaced pagan images, as seen in a first-century marble bust of Aphrodite with a cross carved on her forehead, others borrowed freely from pre-Christian works of art as they developed a new iconography to express Christian beliefs.

The Christian Empire: Spiritual Life will showcase works dating from the sixth to the 14th century made for the church or private worship. They include mosaics—the Byzantine art form par excellence—such as one example from 1100 that depicts the apostle Andrew against a glittering gold background that once adorned the sanctuary of a church and a very rare, large processional mosaic icon of the Virgin and Christ child from the late 1200s that has never before been seen outside of Greece. Among the church furnishings on view are the late 10th-century gilded silver Adrianople Cross and a 14th-century silk-and-linen Epitaphios (a large embroidered cloth icon).

Though icons were made in different media, most were painted in tempera on wood. Several examples will be on view in this section, including the golden 12th-century two-sided icon with Virgin Hodegetria and The Man of Sorrows, and the exquisite Archangel Michael, being lent to the United States for the first time. The icon exemplifies Byzantine artists’ ability to mix and blend pigments to create a sense of volume in the figures they modeled, a skill that had waned in Western Europe after the end of antiquity but was preserved in Byzantium. The export of Byzantine icons contributed to the revitalization of panel painting in Europe.

The Pleasures of Life will focus on secular works of art for the home, such as floor mosaics, silver dinnerware, ceramic plates, perfume flasks, bronze and glass lamps, and exquisite jewelry, including gold bracelets, armbands, necklaces, rings, and earrings. Also on view will be the most lavishly illustrated copy of the Romance of Alexander, a fictionalized story of the adventures of Alexander the Great, one of the most popular books of the Middle Ages.

Intellectual Life will present illustrated manuscripts containing works of scripture, theology, and liturgy, subjects that dominated intellectual life in the Christian empire. The Byzantines were also proud of their ancient Greek heritage. Manuscript copies of Homer’sIliad and texts by Euripides, Socrates, and Euclid will be included to indicate the important role Byzantine scribes played in passing down the tradition of classical learning and literature to the Renaissance and modern era.

The Last Phase: Crosscurrents will conclude the exhibition with works of art reflecting the final flowering of Byzantine art under the emperors of the Palaiologan dynasty (1261–1453), the most long-lived of all Byzantine dynasties. The works reflect a heightened interest in naturalism and narrative detail, as seen in the 15th-century icon known as the Volpi Nativity. Works in this section reveal cross-influences between the Byzantines and Western crusaders who occupied Byzantine territories in the 13th century. Crete, which fell to the Republic of Venice in 1211, became a major center of icon production where artists worked for both Greek and Italian patrons, creating paintings in a hybrid style seen in IHS (Jesus Hominum Salvator) by the Cretan artist Andreas Ritzos, which combines Western and Byzantine imagery.

The exhibition will be coordinated in Washington by Susan M. Arensberg, head of exhibition programs at the Gallery, and in Los Angeles by Mary Louise Hart, associate curator of antiquities, J. Paul Getty Museum. The fully illustrated catalogue that will accompany the exhibition is written by international scholars in the field of Byzantine art. A companion volume will discuss historical sites in the major Byzantine cities and towns in Greece, placing emphasis on recent archaeological discoveries.

The National Gallery of Art and its Sculpture Garden are at all times free to the public. They are located on the National Mall between 3rd and 9th Streets at Constitution Avenue NW, and are open Monday through Saturday from 10:00 a.m. to 5:00 p.m. and Sunday from 11:00 a.m. to 6:00 p.m. The Gallery is closed on December 25 and January 1. With the exception of the atrium and library, the galleries in the East Building will be closing gradually beginning in July 2013 and will remain closed for approximately three years for Master Facilities Plan and renovations. For specific updates on gallery closings, visitwww.nga.gov/renovation.

For information call (202) 737-4215 or the Telecommunications Device for the Deaf (TDD) at (202) 842-6176, or visit the Gallery’s Web site atwww.nga.gov. Follow the Gallery on Facebook atwww.facebook.com/NationalGalleryofArt and on Twitter atwww.twitter.com/ngadc.

Visitors will be asked to present all carried items for inspection upon entering. Checkrooms are free of charge and located at each entrance. Luggage and other oversized bags must be presented at the 4th Street entrances to the East or West Building to permit x-ray screening and must be deposited in the checkrooms at those entrances. For the safety of visitors and the works of art, nothing may be carried into the Gallery on a visitor’s back. Any bag or other items that cannot be carried reasonably and safely in some other manner must be left in the checkrooms. Items larger than 17 by 26 inches cannot be accepted by the Gallery or its checkrooms.

For additional press information please call or send inquiries to: