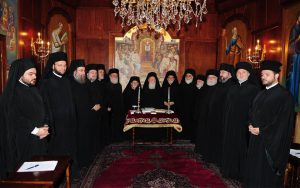 Holy and Sacred Synod of the Ecumenical Patriarchate

NEW YORK – Ecumenical Patriarch Bartholomew issued an announcement about the decisions of the Holy Synod during their November 26-29 meetings, presided by him. He wrote among other things that “the members of the Holy Synod surround His Eminence Archbishop Demetrios Geron of America “with brotherly love and esteem.”

The entire announcement is as follows:

“The Holy and Sacred Synod convened for its regular meetings on November 26–29, 2017, presided by His All Holiness Ecumenical Patriarch Bartholomew.

“During these meetings, all the issues on the daily agenda were reviewed and appropriate decisions were taken on all items.

“At the conclusion of its meetings, the Holy and Sacred Synod denounced the recently published articles regarding the issue that arose at the Archdiocese of America and those against the person of His Eminence Archbishop Demetrios Geron of America, whom the members of the Holy Synod surround with brotherly love and esteem.

“Relevant discussions during the synodic sessions were conducted, as always, in the spirit of openness and brotherly love and in a civilized manner, and at their conclusion, “His All Holiness and His Eminence Metropolitan Konstantinos Geron of Nikaia, on behalf of the Holy and Sacred Synod, exchanged the customary addresses and responses for the upcoming Christmas season.”

But The National Herald reveals what is transpiring behind the scenes.

The discussions at the Holy Synod about the extremely serious problems of the Archdiocese of America, which Archbishop Demetrios has essentially led to bankruptcy, the rebuilding of the St. Nicholas Church at Ground Zero, and the total rejection of the Report of the Legal Committee regarding the List of Candidates for the High Priesthood, ended on November 28.

On the morning of the 29th at the start of the Synodical meeting, Metropolitan Amfilohios of Kissamos, Crete pulled out a piece of paper from his pocket and started reading it. He said: “Your All Holiness, having read the news articles, last night I received telephone calls from two very serious hierarchs who expressed their concern about those leaks to the press and I would like to talk about this issue. Our brother Archbishop Demetrios of America is in a difficult position, and we should support him.”

TNH has learned that Metropolitan Amfilohios didn’t open his mouth at all during the discussions in the previous days on all the issues concerning the Archdiocese and Demetrios.

Demetrios expressed his warm thanks to Amfilohios and he said that a press release should be issued, which will deny everything.

Immediately thereafter, Metropolitan of Smyrna Bartholomew spoke, saying the leak about the sanctification of Fr. Iakovos Tsalikis is not a bad thing, it is a joyful thing. But those detailed leaks are something unpleasant.

Patriarch Bartholomew said “leave the issue to me. I will do the announcement.”

It should be noted that Amfilohios is closely connected with Metropolitans Bartholomew and also Demetrios of Sebasteia, who are both warm defenders and protectors of Demetrios, regardless of the serious problems he currently faces. Bartholomew of Smyrna was the only one who defended Demetrios in the Synod on the previous days.