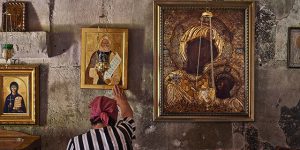 Mgvimevi Monastery church, near the city of Chiatura in the Imereti region of Georgia.

Concentrated in Europe, Orthodox Christians have declined as a percentage of the global population, but Ethiopian community is highly observant and growing

Over the last century, the Orthodox Christian population around the world has more than doubled and now stands at nearly 260 million. In Russia alone, it has surpassed 100 million, a sharp resurgence after the fall of the Soviet Union.

The geographic distribution of Orthodoxy also differs from the other major Christian traditions in the 21st century. In 1910 – shortly before the watershed events of World War I, the Bolshevik revolution in Russia and the breakup of several European empires – all three major branches of Christianity (Orthodoxy, Catholicism and Protestantism) were predominantly concentrated in Europe. Since then, Catholics and Protestants have expanded enormously outside the continent, while Orthodoxy remains largely centered in Europe. Today, nearly four-in-five Orthodox Christians (77%) live in Europe, a relatively modest change from a century ago (91%). By contrast, only about one-quarter of Catholics (24%) and one-in-eight Protestants (12%) now live in Europe, down from an estimated 65% and 52%, respectively, in 1910.1

Orthodoxy’s falling share of the global Christian population is connected with demographic trends in Europe, which has lower overall fertility rates and an older population than developing regions of the world, such as sub-Saharan Africa, Latin America and South Asia. Europe’s population has long been shrinking as a share of the world’s total population, and, in coming decades, it is projected to decline in absolute numbers as well….

CLICK HERE TO READ THE ENTIRE ARTICLE AT PEWFORUM.ORG