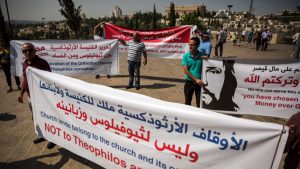 In an unusual step, the police prohibited a member of Israel’s Greek Orthodox community from entering a town in Israel’s north last week, ahead of the Sunday’s visit to the town by the church’s patriarch, after the man called for the leader’s ouster.

Police issued a restraining order against Ghassan Munair last Thursday, barring him from the town of Kafr Reineh in the Galilee for one week over “suspicions of endangering public safety.” Munair, a political activist from the central city of Lod, had called for the removal of Patriarch Theophilos III of Jerusalem over sales of church land to private developers.

Protests against the patriarch have grown in recent months following the discovery of documents stating that the church sold properties it owned in Jerusalem, which house thousands of residents, as well as assets in Jaffa, Caesarea and Tiberias.

“We want to liberate the church from the Greek takeover over the years and take care of our community, which [the patriarch]is neglecting, and not worry about them,” Munair told Haaretz.

He stated that instead of tending to the church’s members, the patriarch made a final and absolute sale of holy assets, which are meant to be the economic backbone of the Orthodox community.

Theophilos celebrated the Divine Liturgy in Kafr Reineh’s Orthodox church on Sunday. He was given a police escort to the church and officers prevented protesters from approaching him and his entourage. Hundreds of community members shouted at the patriarch as he entered the church, calling him corrupt and unworthy of his high position and urging him to resign. Dozens of community members accompanied Theophilos into the church for mass.

A number of political activists and heads of the Orthodox community in Kafr Reineh published an statement denouncing the patriarch’s visit. They called for people to oppose the church property sales and said that the contracts of the sales were tainted by corruption.

The attempt to block the patriarch’s visit was the first test for local representatives after a conference in Bethlehem last week called for the ouster of Theophilos and reforms in the way the community’s property is managed. The conference drew hundreds of Greek Orthodox Christians from Israel and the West Bank, as well as representatives from Jordan and various Palestinian factions. Also in attendance were Mahmoud Aloul, a senior Fatah official, and Bishop Atallah Hanna, who has openly opposed the patriarch.

The conference adopted the conclusion that the sale of church property is a national Palestinian issue that threatens the continued presence of the Christian community in Israel. It called for immediate action to suspend all such transactions and block Theophilos and his supporters from interfering with church assets. It also called on conference participants to boycott the patriarch and refuse to welcome him at receptions, masses and especially Christmas celebrations.

The conference participants admitted that they are not receiving any official support from the Palestinian Authority and Jordan, but hope that public pressure will help on that account. Some Arab communities have already issued calls to boycott the patriarch and not welcome him at events, they said.

The patriarchate and the police both declined to comment on the restraining order.